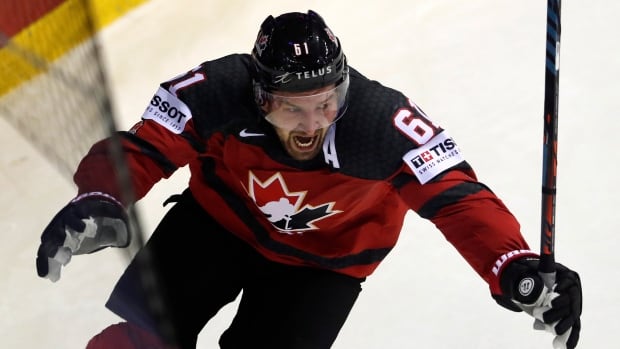 Mark Stone scored in overtime to give Canada a dramatic 3-2 win over Switzerland in the quarter-finals at the world hockey championship in Kosice, Slovakia, on Thursday.

Canada’s Damon Severson tied it with 0.4 seconds left in regulation on a goal that was confirmed by video review.

In the 3-on-3 overtime, Stone got a step on a Swiss defender and put a pass from Pierre-Luc Dubois behind goalie Leonardo Genoni to win it.

Stone’s seventh goal of the tournament came at 5:07 of the 10-minute period. If neither team scored, there would have been a shootout.

Mark Stone scored in overtime to give Canada a dramatic 3-2 win over Switzerland in the world hockey championships quarter-finals. 0:29

The tying goal came with Canada goalie Matt Murray was pulled for an extra attacker, Severson’s shot from the point dribbled over the goal line after it hit Genoni’s pad and blocker. After a video review that lasted about five minutes, it was confirmed as a goal.

Canada (7-1) has now won seven games in a row. Canada finished first in Pool A, while Switzerland (4-4) was fourth in Pool B.

Canada finished fourth last year after losing to Switzerland in the semifinals before dropping the bronze-medal game against the United States.

Nico Hischier gave Switzerland a 2-1 lead with three seconds left in the second period. The first overall pick by the New Jersey Devils in the 2017 NHL draft, Hischier put a rebound past Murray with Switzerland on a power play.

Damon Severson tied Canada’s world quarter-final game against Switzerland with 0.4 seconds left in regulation, before Canada went on to win in overtime. 1:10

Canada was playing without top scorer Anthony Mantha, who received a one-game suspension for his hit to the head on American Colin White in the final game of the preliminary round.

Stone, a Vegas Golden Knights forward, tied it at 1-1 when he tipped a Dante Fabbro shot past Genoni at 5:45 of the second period.

Sven Andrighetto cashed in on the power play to open the scoring for Switzerland with 1:54 left in the first.

Russia beat the United States 4-3 in another quarterfinal on Thursday.

Finland was scheduled to play Sweden and Germany was set to meet the Czech Republic in the other quarter-finals later Thursday.

The semifinals are Saturday and the final is Sunday.