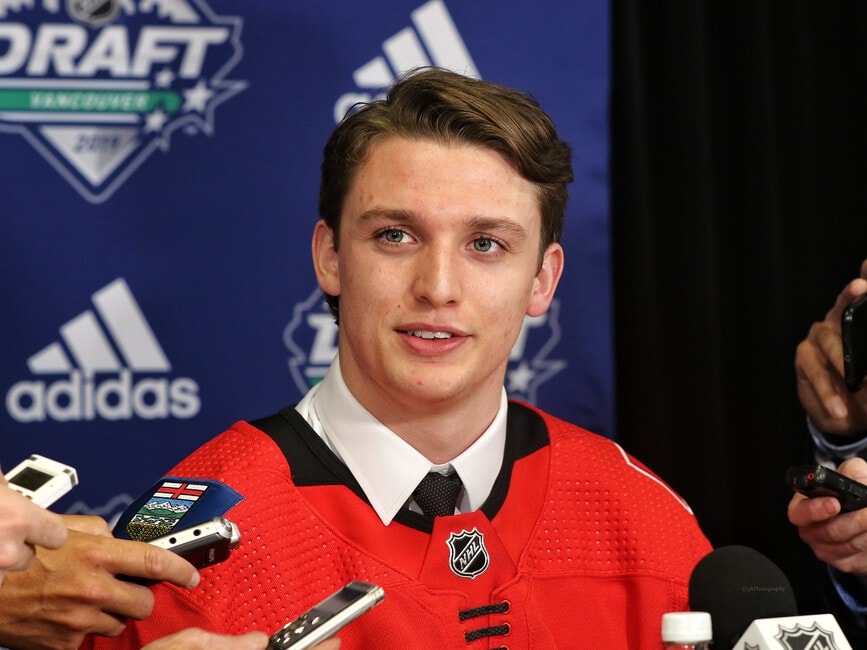 The Calgary Flames went into the 2019 NHL Draft in Vancouver hoping to improve their team and potentially add some draft picks. They didn’t make any trades to add selections, but they didn’t trade any away and ended up selecting five players over the weekend.

In an interesting twist, the Flames seemed to continue a trend with their drafting and development in recent years. They drafted five players, all of whom play the game with skill but none of which are listed at over six feet tall.

In the first round, the Flames selected left wing Jakob Pelletier at 26th overall. A 5’9″ offensive-minded forward for the Quebec Major Junior Hockey League’s Moncton Wildcats, Pelletier was lauded by Flames general manager Brad Treliving for his competitiveness and tenacity – essentially, he’s a small-bodied player that does not play small.

In the third round, the Flames went somewhere they have rarely gone in the NHL Draft: Russia. At 88th overall, they selected Ilya Nikolayev from Loko Yaroslavl of the Russian junior league. A highly competitive two-way player, Nikolayev was Vasili Podkolzin’s primary center when playing for the Russian national under-18 team. He was the first selection the Flames made from a Russian league since Rushan Rafikov late in the 2013 NHL Draft.

In the fourth round, the Flames nabbed a forward from a familiar source: Sweden. They selected winger Lucas Feuk at 116th overall from Sodertalje of the Swedish junior league. A budding power forward – whose name is pronounced like “folk” – Feuk was a point-per-game and penalty-per-game player in the Swedish U20 league, a sign of his hard-nosed playing style.

In the fifth round, they selected center Josh Nodler from the United States Hockey League’s Fargo Force – a team coached by former Flames amateur scout Pierre-Paul Lamoureux. As with the other forwards selected, Nodler is considered to be an effective two-way player with some untapped offensive upside. He’s committed to Michigan State University for the fall.

Finally, four picks away from the end of the 2019 NHL Draft (214th overall), the Flames selected Everett Silvertips goaltender Dustin Wolf. One of the top goaltenders in the entire Western Hockey League, Wolf likely slid down the draft board due to his relatively small stature – he’s six feet tall, short for a goalie – but was visibly emotional and relieved when the Flames selected him.

The Flames grabbed a bit of everything, except for defensemen. Head amateur scout Tod Button quipped to the assembled media on the draft floor that they wanted to stick to their list and grab the best players, which resulted in a forward-heavy crop.

As with the 2018 NHL Draft, the Flames made lots of long-term plays. Nikolayev and Feuk likely won’t play in North America for a couple seasons due to their European contractual commitments, while Nodler headed to college, and Pelletier and Wolf are likely to play out their junior eligibility. It will be likely be 2021-22 before any of these young men play a second of professional hockey in the United States or Canada.

In other words: don’t expect anybody from the 2019 NHL Draft to jump right into the big leagues like Sean Monahan (2013), Sam Bennett (2014) and Matthew Tkachuk (2016) did following their selection.