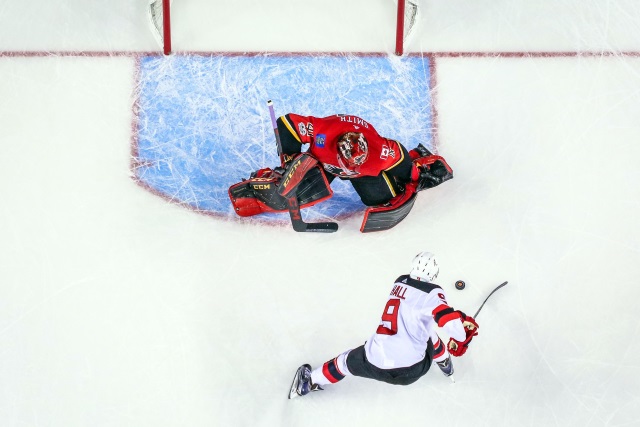 Dan Rosen of NHL.com: (mailbag) Think that Taylor Hall will sign a long-term contract extension with the New Jersey Devils but it may not happen until at least halfway through the year. Hall can show the Devils that he’s healthy, and Hall will have a better feel for the additions the Devils made this offseason. Hall could get a contract similar to Artemi Panarin’s seven years and $81.5 million.

With Mitch Marner expected to be the highest paid restricted free agent, the other top RFAs seem to be just waiting for him to set the bar. Expect that Marner will be the first to sign, then the rest will follow quickly. The start of training camp is a soft deadline.

Ryan Dittrick of NHL.com: Calgary Flames GM Brad Treliving will be actively looking to fill the hole left by the injury to defenseman Juuso Valimaki.

“We’re going to be in the market,” Treliving said of a possible trade or free-agent signing to help shore up the left side. “The good news is that we have some young guys that we think have taken some steps, but we’re certainly going to be looking at potential options on our blueline.”

Jared Clinton of The Hockey News: Internal options to fill Valimaki position could be Oliver Kylington and Alexander Yelesin. External options for the Flames could be:

Ben Hutton – UFA – The Vancouver Canucks didn’t qualify the 26-year-old. He’ll likely have to sign for less than the $2.8 million he made last year.

Derek Forbort – Los Angeles Kings – The Flames could send Michael Frolik and his $4.3 million, as well as a draft pick.

Joel Edmundson – St. Louis Blues – The Blues scratched Edmundson for two of their final four games. The Blues will have some future cap issues and may need to let Edmundson go to free agency after the season. The Blues would need to take some salary back.

Carl Gunnarsson – St. Louis Blues – Only a $1.75 million salary cap hit for the 33-year-old. The Blues could get a asset or two and create some more room on their blue line.

Joe Morrow – UFA – He wouldn’t be needed to log big minutes and could come in on a relatively cheap one-year deal.