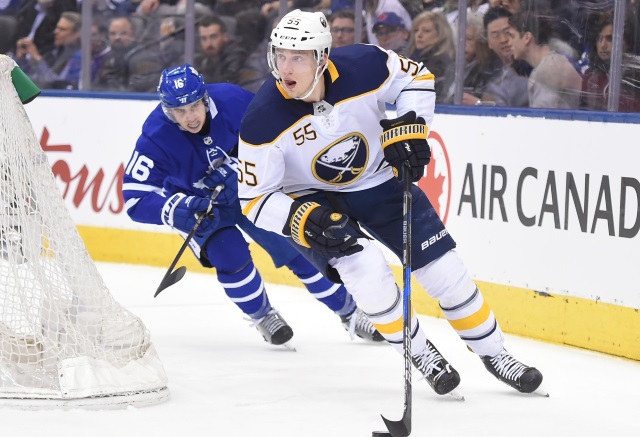 Will the Sabres move Ristolainen before the start of the season?

Lance Lysowski of the Buffalo News: (mailbag) Don’t think that defenseman Rasmus Ristolainen starts the season with the Buffalo Sabres. The Sabres would likely be okay with him remaining with the team though. Unsigned RFAs have put a hold on league activity. Ristolainen indicating he’d like to be moved also decreases any leverage the Sabres had.

Sabres GM Jason Botterill won’t trade Ristolainen unless he gets what he wants in return.

If the Sabres had bought out Vladimir Sobotka it would have decreased their flexibility for next season. With the LTIR option there for the Sabres, they didn’t need to immediately create the salary cap space.

Maple Leafs Hot Stove: Elliotte Friedman on Sportsnet 590 on Toronto Maple Leafs restricted free agent Mitch Marner. Friedman notes that part of the problem is there is no real deadline at the moment.

“The thing about the Marner thing that is really fascinating to me is that I’ve had people tell me they don’t think they’re really that far off on a short-term deal. I’ve had other people telling me the team is really starting to get fed up with the way this is going. We’ll see how it goes.”

“To me, I think the frustration is that if you want to do a long-term deal, they just haven’t moved anywhere. I think that the organization is really frustrated by that — that it isn’t going anywhere. The other thing, too, is that I just think there is a really feeling with the Leafs that what happened with Nylander, they’re not doing that again. They’re not going through that again. They are not signing a guy on December 1st. I just think there is a lot of frustration because of all of that.”

Friedman adds that Marner is likely frustrated as well.