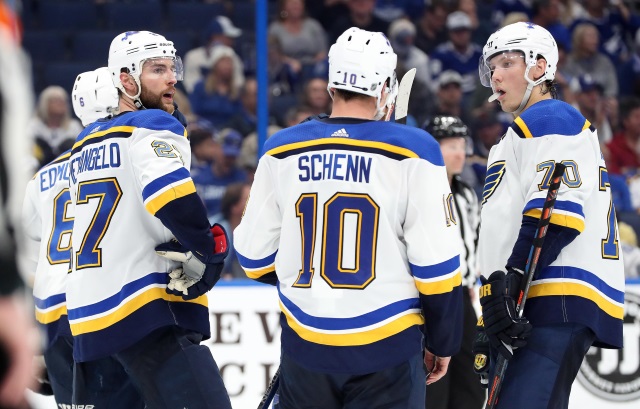 Sam Carchidi: A source has said that the agent for KHL winger Anton Burdasov had approached the Philadelphia Flyers recently to see if there was a fit for this season, but the Flyers decided to stick with what the have.

Jeff Gordon of the St. Louis Post-Dispatch: (mailbag) Defenseman Alex Pietrangelo will be a free agent after the season and getting him re-signed is a top priority.

Forward Brayden Schenn has a year left on his contract and could be looking for $7 million if he has another good season. There is no reason for the St. Louis Blues to trade him right now.

Think that GM Doug Armstrong would like to get Ivan Barbashev signed between $1.5 and $2 million.

The Blues could look to move someone at the end of training camp to create some cap flexibility.

Defenseman Joel Edmundson will make $4 million this year and will be a UFA. They could look at trading during the season or let him play out the year as an ‘own rental.’

Kristen Anderson of the Calgary Sun: Calgary Flames defenseman Travis Hamonic on having his name in the rumor mill for most of the offseason.

“I’m someone that stays away from that stuff, first of all,” Hamonic said. “I obviously really like being here and feel I fit in well with the group and the team. I think you can’t listen to any of that outside noise and have to focus on the task at hand, which is waking up every day in the summertime and getting into the gym, training. And then when that’s over with, you just try to be a dad and not let any of that outside stuff affect you … for me, I just go about my business.”