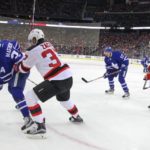 Tom Hunter: Darren Dreger on the Toronto Maple Leafs and Mitch Marner: “Why can’t they bump the offer up a little, just offer him $11 million for 6 years and draw the line in the sand”

First Up TSN 1050: Dreger on TSN 1050: “Unless something changes, I believe his plan is to go to Switzerland in the 3rd week of this month”

Michael Augello: Dreger indicated on TSN 1050 that before defenseman Jake Gardiner signed with the Carolina Hurricanes, the Maple Leafs were not really in on Gardiner.

Rick Ralph: Winnipeg Jets GM Kevin Cheveldayoff on the remaining restricted free agents on TSN 1200: “It’s all part of the business that you have to get done. So whether you have one, two, (or) four, as a manager….you still have work to get done in that department until you don’t.”

Rick Dhaliwal: An agent for a big named RFA: “I am hearing of much more activity, You’re going to see movement this week, 1st pressure point of training camp is here.”

Elliotte Friedman: There is a report from @Karel_Knap from the Czech Republic that the New Jersey Devils and Pavel Zacha have agreed to an extension. Nothing is official yet.

Aivis Kalnins: Omsk didn’t confirm that they agreed to terms.

“His agent told me a couple days ago (that he could sign in the Kontinental Hockey League), but I’m hopeful we’ll get something done over the next few days entering training camp,” Shero said Monday at the Prospects Challenge in Buffalo. “I think we’re trying to find the right term and based upon his age. He’s a real good fit for us and a good player, he’s a young guy whose game is evolving. I think we can get something done, hopefully, but I can’t control what he does. If (the KHL) is the route he likes, it’s going to be a long road back to the NHL.”