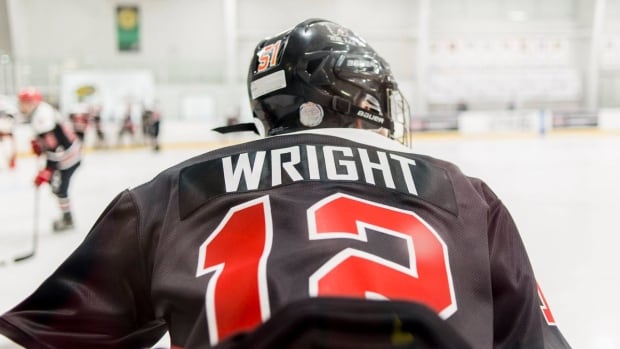 The next generation of NHL stars, all across Ontario, are starting their Ontario Hockey League season.

That includes Shane Wright, the 15-year-old sensation who was given exceptional status to play in the OHL. He’ll be on the ice for the Kingston Frontenacs tonight at 7 pm. against the Oshawa Generals.

He’s just one of the young stars to keep an eye out for, says Paige Martin host of the London Knight’s television broadcasts. She’ll be providing an insider’s look at the OHL all season long for the CBC.

The Ontario Hockey League season is just under way. Paige Martin, OHL columnist with CBC London takes a look at who to watch to start the 2019/2020 season. 7:28

Martin spoke with the CBC’s Conrad Collaco about what to expect at the start of the OHL season. You can read an abridged and edited version of the interview or listen to the full audio interview by hitting the play button above.

What is it about the OHL that’s different from NHL coverage?

It’s so interesting to kind of explore that because you know of course they’re different but the OHL does such a phenomenal job at making fans feel like they’re really at a professional hockey game because you are. When you’re there the OHL really allows you to feel connected to these teams and these players and I mean of course the rinks aren’t as elaborate as an NHL rink would be but that allows a bit more of an intimate setting while still feeling like you’re at a professional event because they just do such a great job at putting on an entertaining show for the fans and the hockey is still incredible.

You’re watching these guys who are already drafted to the NHL or are spending time in their summers with NHL teams. Some are making their case to be drafted. They’re all right there amongst these teams and you also got to remember that these are 16 to 20-year-old kids who are playing at this intense high level and they’re phenomenal at it.

Which teams and players have you most excited this season?

Well, if we start with players, I am very excited to see the Kings and Frontenac Shane Wright because he was the big story last year. He went first overall in the draft and he went a whole year before kids usually get drafted and that’s a story in and of itself. I’m also quite excited to see Cole Perfetti play. Last year he had such a dominant rookie season with the Saginaw Spirit. Now he’s heading into his draft year he’s expected to go high, likely in the first round of the draft. He’s going to be a threat to every team. He walked into Budweiser Gardens last year in March and singlehandedly scored all four goals. Which is crazy as a rookie. That’s that’s super exciting. I think there’s going to just be so many cool stories throughout the season.

How will Wright do, as a 15-year-old, against players who are much bigger and faster than he is?

I think that’s an interesting conversation too because people forget, especially with rookies, just the jump that happens at that age going from when you’re playing at 15 to 16 and all of a sudden you’re in the OHL and you’re playing against these 20-year-old men, essentially, and how to adapt to that. A lot of the guys, when you talk to them, in their first few games in the OHL they’re just like ‘it is so much faster.’ You just gotta keep up and you’ve got to keep your head up as well. Someone’s always there to either take the puck away from you or knock you right into the boards. So, it’s interesting seeing them adapt to that and learn and just how exponentially better they get within their rookie season if they’re up for it.

Which teams are you most excited about this year?

I’m excited to see the Saginaw Spirit. They fell just short of the conference championship against the Guelph Storm last season and this season they have several NHL prospects. They have a star goaltender who’s property of the Arizona Coyotes. That’s Ivan Prosvetov. There are a few defenseman. There’s Mason Millman and Bodie Wilde and then several forwards as well who are NHL prospects. And then you also have Cole Pefetti who I just talked about with 74 points in 63 games last season. He’s just going to multiply that and then the Ottawa 67s are definitely expected to be another powerhouse. They won the Eastern Conference last season so they’re hoping to go back to back.

And then of course the London Knights they’re always kind of a consistent favorite because the Hunters, they know how to build a team. And it seems like each season, when you’re not really sure you know you lose guys like Adam Boqvist, Evan Bouchard and Alex Formenton. They’re moving on to bigger leagues now. T hey always have something in their back pocket. They always have guys who are ready to come up and they’ve been developing for a few years so it’s interesting to always watch how they work with that.

What can other OHL cities learn from London’s success on and off the ice?

I think it’s been really cool to see the evolution of the London Knights. Almost 20 years ago, with the management switching over to the Knights, they build this arena and take it from the icehouse to Budweiser Gardens. Just seeing the way that people care. I think also geography is definitely a good element of it. In London you have to drive two hours either way if you want to see a professional team —Detroit or the Maple Leafs. So, geographically it’s pretty good. Essentially, I think it’s the community. If you can get people to care about these guys and get them in the community — you know the Knights didn’t win a Memorial Cup for a very long time but Hamilton, they have one under their belt, so that’s quite exciting for them especially being a newer team. It can be harder especially once you get deeper into the GTA because a lot of people like to turn towards Toronto but especially just caring about them.

It’s definitely a work in progress. It didn’t come to London right away but it it will. The more you can get those guys in the community… It’s a university town as well just like London. If you can get McMaster students to be able to to come out to a few games and do events like that. I know that London does a lot of corporate sales as well and that gets a lot of people out and then it gets them the experience. If you get into the workplace and say ‘hey we have these tickets to the OHL game kind of thing’ and go see this amazing hockey team. These kids are  super good and then people experience that and they can come back and want to come back that they’ll definitely leave wanting more.