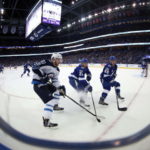 Canucks were looking at Lucic

Luke Fox: Agent Gerry Johansson said on Sportsnet 650 that there had been a chance this past offseason that Milan Lucic could have landed with the Vancouver Canucks. There had been talks with the team and Lucic was into the idea.

More Russian free agents may look at the NHL

Jim Matheson: The agent for Anton Burdsaov (PTO with Oilers), Shumi Babaev, said that with the KHL having a $15 million salary cap next season, there could be more Russian free agents considering the NHL.

Point and Lightning not close

Luke Fox: The agent for Brayden Point, Gerry Johansson, on Sportsnet 650 on contract talks with the Tampa Bay Lightning:  “We’re a ways apart right now…. We’re not that close, frankly.”

“That’s not to say the restricted free agents still without a contract aren’t interested in continuing to negotiate, of course they are. If I look at Calgary and I look at Matthew Tkachuk and that negotiation, I’m told it remains status quo. The process continues. Sounds a little bit cliché.

Meanwhile, Mikko Rantanen of the Colorado Avalanche, I think there’s more of a gap there and that one becomes more of a contentious issue, perhaps likewise with Brayden Point and the Tampa Bay Lightning.

We haven’t talked about Kyle Connor in relationship to the Winnipeg Jets,” said Dreger. “So it’s too soon to say whether or not the Boeser signing or the Mitch Marner signing late last week will have any sort of influence.”

Will a team consider trying to offer sheet one of the remaining RFAs? Dreger:

“I can tell you when I look at the Marner case and the six-year extension at $10.893 million and Darren Ferris, the agent, on TSN Radio to start this week talking about the reality of the offer sheets that were willing to be presented, I would wonder and I got teams asking me why this hasn’t happened. If a team out there who is perhaps targeting Marner looks at one of these other top RFAs now.”