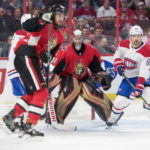 The 2019-20 NHL regular season is now underway. As fans settle in for another season of hockey action, they’ll also keep an eye on the rumor mill to determine which players could become trade candidates.

As teams assess their rosters in the coming weeks, trade activity could pick up. Here’s a look at this season’s top Eastern Conference trade candidates. On Thursday, we’ll examine those in the Western Conference.

He was the subject of frequent trade speculation throughout the off-season. At one point, rumors linked the 24-year-old defenseman to the Anaheim Ducks and Winnipeg Jets.

With Brandon Montour sidelined for a month, the Sabres won’t move Ristolainen now. However, the trade chatter could resurface upon Montour’s return. A top-four blueliner carrying a reasonable salary-cap hit ($5.4 million) through 2021-22, Ristolainen would be a decent trade chip to land a scoring winger.

Acquired from the Ottawa Senators last year, Hoffman enjoyed a career-best 36-goal, 70-point effort in his first season with the Panthers. The 29-year-old left-winger already had four goals in his first two games of the season.  However, he’s also slated to become an unrestricted free agent next summer.

Another strong performance this season could make Hoffman expensive to re-sign. If the Panthers are out of playoff contention by the Feb. 24 trade deadline, he could be on the block.

Another winger slated for UFA status next July, Kreider frequently surfaced in the off-season rumor mill. While the Rangers opted to keep him to open the season, there’s no indication of contract talks with the winger’s camp. Cap Friendly indicates the Blueshirts have over $64 million invested in 14 players for 2020-21.

Kreider is expected to seek a significant raise over his current $4.625 million annual average value. Should the Rangers struggle to secure a playoff berth by late-February, the left-winger could find himself skating with another club.

Two inconsistent seasons and a seemingly indifferent preseason effort sparked recent speculation suggesting the Canadiens could shop Drouin. GM Marc Bergevin dismissed the rumors and defended the 24-year-old winger, who’s under contract through 2022-23 with an AAV of $5.5 million.

While oozing with offensive talent, Drouin’s streaky production and poor defensive play can test the patience of Habs fans. Another spotty effort during this season could pressure Bergevin to consider a trade.

Clubs in need of a playoff rental between the pipes could come calling for Anderson at the trade deadline. The 38-year-old goaltender will become a UFA on July 1.

With the Senators in full rebuild mode, this is probably Anderson’s final season in Ottawa. He carries a 10-team no-trade list but could be willing to join any playoff contender for one more shot at the Stanley Cup.

Turned 33 on Oct. 12, the veteran defenseman is slated to become a UFA next summer. He can still put up decent offensive numbers while his defensive game has improved over time.

Injuries have hampered Green in recent years.  Nevertheless, he could become an enticing playoff rental if he can remain healthy. His full no-trade clause reverts to a modified 10-team no-trade on Feb. 1.

The 32-year-old defenseman was part of a failed trade that would’ve sent him and Phil Kessel to Minnesota last May for Jason Zucker. A recent report by The Athletic’s Josh Yohe suggested Johnson was on the verge of being moved. So far, however, he remains a Penguin.

With Johnson’s play in decline and carrying a $3.25 million AAV through 2022-23, a trade seems unlikely. Still, one shouldn’t dismiss the possibility.

Once a brash, cocky scoring prospect, the 23-year-old Ho-Sang struggled to secure a regular roster spot with the Islanders. The former first-round pick requested a trade last week after clearing waivers.

Sportsnet’s Elliotte Friedman reports Ho-Sang is telling teams he’s willing to do whatever it takes to get a change of scenery, including starting in the AHL. Perhaps a rival club will take a chance on him.