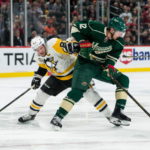 Five teams that could look to make a move

Jared Clinton of The Hockey News: Looking at five teams that could be looking to make a move early in the season.

Minnesota Wild – The Wild are “aging, slow, and not talented enough.” They need to rebuild. They could look at moving Eric Staal, Kevin Fiala, and Jonas Brodin – all don’t have any trade protection.

Dallas Stars – Can’t say coach Jim Montgomery is on the hot seat just year. GM Jim Nill may need to bring in a forward to boost their depth. They could look to move Andrew Cogliano for someone with a little more offense. Thomas Vanek could be a free agent option.

New Jersey Devils – They could use an upgrade on their blue line and maybe to their bottom-six forwards. It may not be easy for them to do without trading draft picks. They could look at the remaining free agent market. Depth trade candidates like Matt Tennyson, Connor Carrick or John Hayden won’t bring much of a return.

Winnipeg Jets – Basically depends on what Dustin Byfuglien does. They could use some blue line help. They could look to move Mathieu Perreault. Jack Roslovic and Nikolaj Ehlers have been in the rumor mill before. The Jets shouldn’t move Ehlers.

Pittsburgh Penguins – How soon will their injured forwards return? Will someone want to trade for either Erik Gudbranson or Jack Johnson? Neither have really fit in, in Pittsburgh. They have a combined $7.25 million and have been healthy scratches. The Pens may need to throw in a sweetener to move them.

The Penguins may need to make some type of move soon

Despite playing well with all the injuries, and getting some early solid contributions from youngsters, the Pens need to make a move.

Internally, Stefan Noesen is on an AHL contract and has some NHL experience. He wouldn’t cost them anything, but the Pens are already at 48 NHL contracts. Andrew Agozzino could be an emergency recall option.

2019 NHL draft picks Nathan Legare and Sam Poulin could be an option for a few games.

Trading for and giving Josh Ho-Sang a fresh start could be looked at. Jason Pominville is a free agent and they might be able to sign him to a two-way deal.