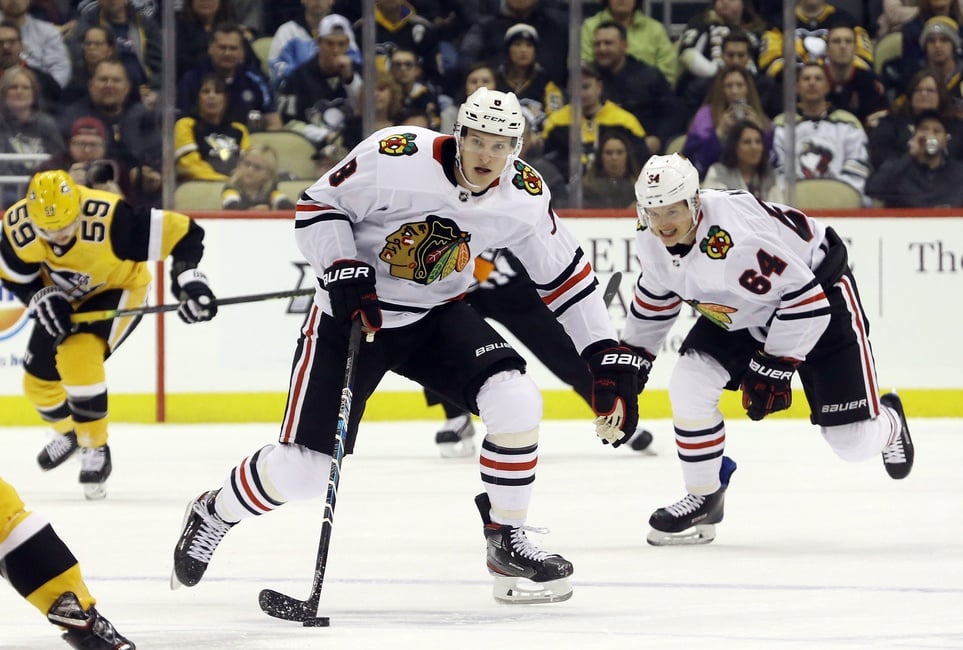 The
Chicago Blackhawks went 2-2-0 in their recent homestand, picking up four of a
possible eight points. Unfortunately, due to the hole they dug themselves in the
first half of the season, this doesn’t seem like enough. Their current record
of 20-20-6 is good for 46 points through 46 games, which is last place in the
Central division. They need every win they can get to climb back into any sort
of playoff contention.

While they can’t go back; the Blackhawks can certainly move forward. They continue to build and are playing better, more consistent hockey. Here are five takeaways from their four-game homestand.

What was
shaping up to be another loss to a lowly opponent turned around with the help
of the two Dylan’s, Dylan Strome and Dylan Sikura last Sunday night. They each
scored within 45 seconds of each other against the Devils in the second period
to tie the game and set the table for an eventual 4-2 come-from-behind win.

And it just happened to be Sikura’s first NHL goal. After 43 games without one, that first tally finally came. For someone who’s scored goals at will at every other level, it was a huge relief.

Unfortunately,
Sikura’s struggles are far from over. One goal isn’t going to automatically
make you a regular in the lineup. The 24-year-old started the year in Rockford despite
playing 33 games with the big club in the 2018-19 season. He was called up in early
December, but has been a frequent healthy scratch.

Sure
enough, after suiting up for four consecutive games, the third of which involved
his goal, Sikura once again found himself of the outside looking in for the last
two contests. With Drake Caggiula now returned to the lineup, and Strome and
Brandon Saad working their way back from recent injuries, Sikura’s future as a
starter is still very much up in the air.

2. Injuries Come at a Tough Time

Speaking of injuries, the Blackhawks are dealing with a lot of them. The biggest of these were the announcements right after Christmas that defensemen Brent Seabrook and Calvin de Haan would both be out for the remainder of the season. But let’s not forget depth forwards Caggiula and Andrew Shaw have both been out with concussions since early and late November, respectively. The good news is Caggiula returned to the team this past Thursday against the Predators.

Defensemen
Connor Murphy missed a total of 12 games with a nagging groin issue, Duncan
Keith was out nine games also due to a groin injury, and Olli Maatta missed
four games with a mysterious illness. Strome was sidelined four games at the
end of November with concussion symptoms and left the game with an ankle injury
last Sunday against the Red Wings. And Saad has also been out also with an ankle
injury since Dec. 21. Goaltender Robin Lehner missed three games due to knee
injury.

All this has required the younger players to step into bigger roles sooner rather than later. Which isn’t necessarily a bad thing. Rookies such a Kirby Dach, Adam Boqvist and Dennis Gilbert are learning on the fly. But there are still growing pains that go along with it.

In spite of it all the Blackhawks have won eight of their last 13 games. Imagine what they could have done with a healthy roster.

3. Putting it all Together

Injuries and inexperienced players aside, the Blackhawks are starting to play more consistently. They still have bad periods, but they’re stringing together more and more good frames. They still have turnovers and flawed shifts, but then they bounce back.  Head coach Jeremy Colliton spoke about their evolution after Saturday’s win over the Ducks.

We’re there. We’re close. Not in the standings, and I understand that, but the way you get where you want to go in the standings is you play hard, you play the right way, you’re patient. Our game over a long stretch of time is improved.

Obviously
the improvement needs to continue. The Blackhawks appear to be putting it all
together, but it’s imperative they don’t falter and keep moving forward.

The Blackhawks suffered yet another humiliating loss to the Predators last week. Remember the 3-0 loss from Oct. 29 when goaltender Pekka Rinne claimed it was one of the easier shutouts of his career? Well, that same Rinne added insult to injury when he scored an empty net goal on the Blackhawks at the end of their Thursday night matchup. Rinne is only the 12th goalie in NHL history to manage this feat.

After
the shutout loss in October, the Blackhawks responded with a commanding 7-2 win
over the Preds and Rinne in November. Perhaps they can get revenge again. They
host the Predators two more times this season, on Feb. 21 and Mar. 22.

Speaking of goalie goals, Blackhawks’ netminder Lehner has a goal to get paid for his next contract. The 28-year-old will be a free agent of the end of the season, and he spoke with reporters recently about his future. While Lehner indicated he liked it in Chicago and would love to stay, he’s also not about to take a discount. “I’ve been taking discounts my whole life,” he said. “I want to gain some respect that I think I deserve.”

I
certainly don’t blame the man. He deserves to get paid. Whether it’s by the
Blackhawks or not remains to be seen.

How
about that Dominik Kubalik? He scored a goal in each of the past four games,
including two against the Ducks Saturday night. Here’s my personal favorite.

As prefaced in the above tally, Kubalik has done an excellent job of getting to the net and then finding the puck. In the last 17 games, the dynamic forward boasts 10 goals and eight assists. This also coincides with being placed on the top line alongside Jonathan Toews. In that same span, Toews has accumulated five goals and 14 assists. I think it’s safe to say things are working out when these two are together. Look for Kubalik and Toews to continue lighting it up moving forward.

Not that far in the past, there’d be games where he’d make a mistake and you’d lose him for a few shifts or even the rest of the game. He’s handled that way better as far as being able to make a mistake and bounce back and have a better next shift.

Kubalik’s 16 goals on the season is currently second on the team, as well as tied with Buffalo Sabres’ Victor Olofsson for most goals among rookies.

The Blackhawks have five more contests this month before the NHL All-Star break. They hit the road to face the Ottawa Senators and the Montreal Canadiens this Tuesday and Wednesday before heading to Toronto to meet the Maple Leafs Saturday.

Then they head home for matchups against the division rival Winnipeg Jets on Sunday and finally the Florida Panthers next Tuesday. That’s right, the Blackhawks will wrap up their January with a contest against former head coach Joel Quenneville and his new squad. That should be a good one.

Actually all five games should be good ones, as the Blackhawks concentrate on winning at all costs to move up in the standings and push for a playoff spot. Can they string together some victories? Stay tuned!