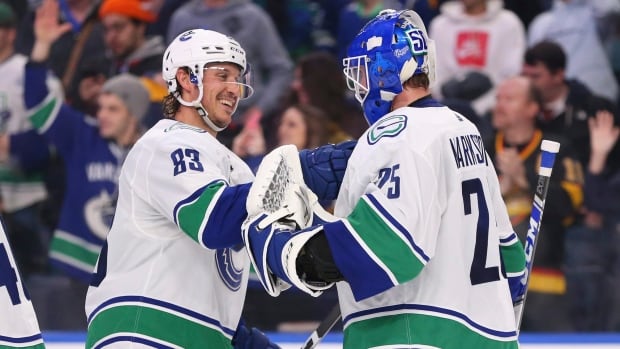 Last season the Vancouver Canucks finished nine points short of the 90 needed to advance to the playoffs in the NHL’s Western Conference.

In the three prior seasons the playoff bar in the West hovered around 95 points. In those years Vancouver missed the mark by 22, 25 and 22 points.

Heading into the NHL all-star break, the Canucks lead the Pacific Division with 58 points from a 27-18-4 record.

With 32 games remaining in the schedule the Canucks hold their playoff fate in their own hands.

“We have been playing some good hockey of late,” said forward Brock Boeser. “We are playing to our identity. We have to really make sure we keep playing that way, not give teams a lot of chances. Play that simple, direct style of hockey we want to play.

“If we can do that every night and play for a full 60 (minutes) I think we’ll keep moving forward in the right direction.”

It’s estimated a team will need around 95 points this year to book a spot in the Stanley Cup tournament. That means Vancouver is going to need at least 19 more wins to end its four-year playoff drought.

The Vancouver Canucks topped the San Jose Sharks 4-1 to move past the Flames, Oilers, Golden Knights and Coyotes for the top spot in the Pacific Division. 1:39

“The most consistent team through this last stretch is going to be the team that makes it to the playoffs,” said forward Brandon Sutter. “If we keep paying the way we have been playing over the last stretch … we are going to be a hard team to beat.”

The Canucks have put themselves in playoff contention by winning 11 of their past 14 games and putting together an eight-game home winning streak.

Goaltender Jacob Markstrom earned himself an invitation to the all-star game by winning 10 of his past 12 starts. During that time, he’s held the opposition to two or fewer goals seven times. Overall, he has a 18-13-4 record, a .916 save percentage and 2.71 goals against average.

“If you have good goaltender you always have a chance,” said Sutter.

The addition of veterans such as forward J.T Miller and defenceman Tyler Myers, plus the return of a healthy Antoine Roussel have added depth and experience to the Canucks.  Rookie defenceman Quinn Hughes, a Calder Trophy contender, has brought speed and creativity to the back end. He is third in rookie scoring with 34 points (five goals, 29 assists)

Elias Pettersson, the NHL’s top rookie last year, has picked up where he left off and leads the team with 21 goals and 30 assists. Captain Bo Horvat has six goals and eight assists in his past 10 games. With 17 goals and 29 assists Miller is on track for career highs. Forward Jake Virtanen has already set a career high with 28 points and needs just one more goal to match his high of 15 in a season.

Even though Vancouver didn’t make the playoffs last year the season was a refresher course. It taught some of the young Canucks how to win.

“We were building towards how we wanted to play, how the organization wanted to look, the culture and standards we have set as a group,” said forward Jay Beagle. “This year you continue to grow as a group and continue to get better.

“I think our overall play has got better. It’s a matter of knowing what works for this group and sticking to it through 60 minutes.”

The Canucks may be on track for the playoffs, but things can still go off the rails.

The race in the Pacific Division is like a crowded phone booth. Just one point separates Vancouver from Edmonton, Calgary, Arizona and Vegas.

The Canucks have 13 games remaining against division rivals. They play Arizona three times and Calgary and Vegas twice. A couple of losses could send Vancouver tumbling out of the wild card race.

After the all-star break the Canucks play the defending Stanley Cup champion St. Louis Blues at home, then go on a road trip where they face the New York Islanders, Carolina Hurricanes and Boston Bruins, all teams above them in the standings.

Injuries could also be a factor. The Canucks have managed to stay relatively healthy this year but if someone like Pettersson or Miller goes down it will test Vancouver’s resiliency.

The Canuck penalty kill remains strong, but the power play has managed just three goals in 31 attempts over the past eight games.

“Down the stretch special teams are huge,” said Sutter. “Teams that go for runs in the playoffs have special teams that are dialled in in March and April.”

The style of games will also change. Teams will focus more on defence. Mistakes will be exploited.

“The compete level, mistakes are less,” said head coach Travis Green. “Guys are mentally more dialled in from shift to shift. There is more on the line so naturally you are going to see the temperature rise in game.

“Everything is magnified as the season progresses.”

One thing Vancouver carries into the final part stretch of the season is a sense of confidence. The Canucks just don’t hope to make the playoffs, they believe they can.

Horvat has been part of Canuck teams whose playoffs dreams had turned to nightmares by the all-star break.

“There is just a different feel that way for sure.”