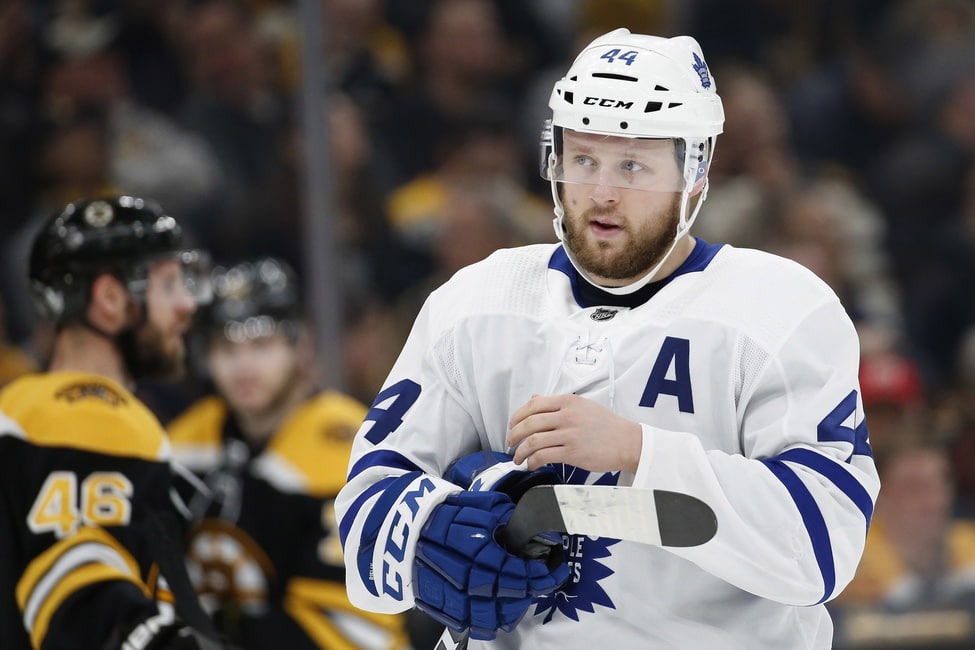 Things could be better for the Toronto Maple Leafs as they head into the All-Star break. In what has already been an eventful season so far, the storylines and issues surrounding the roster haven’t stopped.

From injuries and defensive woes, to Frederik Andersen’s recent struggles in the net, there shouldn’t be any rest and relaxation for general manager Kyle Dubas. With his team currently sitting outside of a playoff position and Dubas recently making a coaching change, his attention now shifts to fixing his roster. Despite a 16-7-3 record under head coach Sheldon Keefe, more moves are necessary. Their recent play suggests that this roster isn’t able to keep up with the other teams.

Struggle Is Happening at the Worse Time

Their old habits of poor defensive play are starting to creep in again, which couldn’t be happening at a worse time. It’s really discouraging to see that a team this talented is struggling to make it into a playoff spot.

Many teams made improvements to their roster in the offseason, which is why the Atlantic Division is really tight. Although the Maple Leafs did make roster changes, there was no significant improvement to their defense. It’s the same as it was when they lost to the Boston Bruins in the playoffs the last two years. Defense has been the team’s Achilles’ heel and nothing has been done to change it.

With Morgan Rielly out for an extended period of time and Tyson Barrie and Cody Ceci not performing well in their own end, Dubas has to be aware that his team’s defense isn’t good enough. It’s been unsteady all year and there is no way that this team’s defensive core, when healthy, is enough to compete for a Stanley Cup. He has to make a move quickly to salvage this year, otherwise, the Leafs could miss out on the post-season.

No Balance on the Roster

While it seemed like a good deal at the time, Tyson Barrie isn’t the defenseman the Maple Leafs need.

Dubas did a great job addressing the need for a right-handed defenseman, but offensive inconsistencies and defensive woes are showing a different narrative. While a puck-moving defenseman is a necessity, you don’t see teams with six offensive-minded defenseman win the Stanley Cup. Names like Jeff Petry and Brenden Dillon could provide that defensive reassurance that the team needs.

The Maple Leafs are already an offensively talented team. With Rielly and Travis Dermott moving the play on the blue line, having a third puck-mover is creating an imbalance on defense.

The St. Louis Blues, Washington Capitals and Pittsburgh Penguins all had balance on their blue line that the Maple Leafs desperately lack. They have the scoring depth up front, which is great, but the defense is nowhere near the caliber of the last three champions. How is any team supposed to win a championship without any reliable defensemen on the blue line?

TSN’s Craig Button gave a great explanation on the Maple Leafs roster balance and how it translates to their play. The imbalance is catching up to them and it’s becoming an issue.

Jake Muzzin has arguably been the Maple Leafs’ best defender this year. Rielly and Barrie have had their moments; but have shown their deficiencies and Ceci hasn’t provided any help whatsoever, with or without the puck. The Maple Leafs need to do a better job at building their defense core and that falls on Dubas to make moves to provide a balance.

Play Away From the Puck

Toronto’s play away from the puck is abysmal. It’s great that they have all these offensive weapons, but it means nothing if you don’t know how to play without the puck. You’re playing with fire if all you’re worried about is scoring goals. As many say, defense wins championships. In the month of January, the Maple Leafs have allowed three goals or more six times in the last eight games and their defensive flaws are extremely noticeable.

Even when things are going well for them, they still manage to provide lackluster defensive efforts. The Maple Leafs were up 6-1 against the New Jersey Devils before allowing three straight goals to make it 6-4. Auston Matthews would eventually score an empty-net goal to seal the deal, but there is no way that they should have allowed the goals that they did.

They can have all five players back in their own zone. But, if the team continues to struggle with their defensive coverage like they did against the Florida Panthers and the Chicago Blackhawks, then making the playoffs will be unlikely.

While the defense has been terrible in their own end, there is no help from the forwards in terms of coverage when the defense pinches up or gets out of position. It’s hard to win when you’re always offensively driven. You could say that injuries have played a factor, though it shouldn’t be an excuse for their poor consistent play on the ice. Players need to step up in Rielly and Muzzin’s absence.

Time Is Running Out

The clock is ticking on the season and everyone from Kyle Dubas to the players needs to sort out their priorities. There are 33 games left to turn things around. There’s still time, but their fate is in their own hands.

The Tampa Bay Lightning, Panthers, Carolina Hurricanes, Columbus Blue Jackets and Philadelphia Flyers are starting to distance themselves from the Maple Leafs in the wild-card standings. The main goal should be to make the playoffs no matter what. Teams have overcome many obstacles where they managed to use said obstacle as motivation. This could be that moment.

The Maple Leafs are four points back of the Panthers for third in the Atlantic and are four points behind the Hurricanes for the final wild-card spot. It’s a small gap, but they need to take advantage and find a way to get points. The room for error is extremely minimal. If they want to have any chance at making the playoffs, Toronto needs to get it together and address their issues head-on. Sheldon Keefe called the team “immature” after two embarrassing losses in one week.

Will this be enough of a reality check? We’ll see what happens down the stretch.

Despite a great record and the offense clicking, the Maple Leafs’ defensive troubles continue. Although they were able to turn the tides from the old coach, their defensive play continues to be a major concern and teams are taking advantage of that. If Dubas wants his team to have any success, he has to make the right move to give this team a fighting chance.

Statistics from NHL and Evolving Hockey.