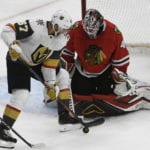 Dennis Bernstein: New York Rangers forward Chris Kreider on trade rumors: ”I have no preference (on destination if I was traded), I’m a Ranger until they tell me I’m not.”

Laura Albanese: Kreider added that he’s not thinking about trade opportunities as he still believes the Rangers have a playoff chance.

Blackhawks haven’t spoken with Lehner yet

Ken Campbell of The Hockey News: Though it shouldn’t really be a surprise, but the Chicago Blackhawks haven’t spoken with pending unrestricted free agent goaltender Robin Lehner about a long-term contract extension.

If the Blackhawks are in the playoff hunt around the trade deadline, there is no way that they would move him. Even if they are looking to move him, there may not be much of market for him as there are not many contending teams in need of a goalie.

The Edmonton Oilers are one team that might be, but they’ve been getting good goaltending.

Lehner is second only to Ben Bishop in save percentage over the past two seasons for goalies who have played over 60 games.

He won’t be in the same money category as Carey Price/Sergei Bobrovsky/Andrei Vasilevskiy, but he could be looking at around $7 million on a long-term deal.

Golden Knights could use a puck-moving defenseman

Jesse Granger of The Athletic: With the trade deadline just over a month away, the Vegas Golden Knights are looking for a defenseman. Will one defenseman be able to improve their blue line enough? They have trouble getting out of their own zone and turn the puck over too much.

The Golden Knights may not have to give up the assets for an elite puck-moving defenseman, but they need to find a good one.

Options with term include Jeff Petry or Anthony DeAngelo or rentals in Erik Gustafsson or Sami Vatanen.