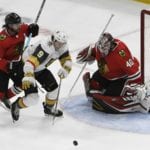 Elliotte Friedman of Sportsnet: The Pittsburgh Penguins continue to be interested in Minnesota Wild forward Jason Zucker. The Wild aren’t ready to give up on their season just yet.

The Chicago Blackhawks aren’t ready to give up on the season yet either. If they get to that point, could former coach Joel Quenneville and the Panthers be interested in Duncan Keith?

Pending UFA Robin Lehner‘s main priority may not be a long-term deal according to Chris Johnston who spoke with Lehner. He may not want to take a lower AAV to get more term.

Sense if that if the Toronto Maple Leafs are going to trade forward Kasperi Kapanen, it’s going to be in a big deal that would make them significantly better.

Believe teams have asked the Maple Leafs about pending free agent defensemen Jake Muzzin, Tyson Barrie and Cody Ceci. Can only see them moving one if they are sold that one of their young guys needs big minutes. Not confirmed but the Leafs and Muzzin may have held some extension talks. Term is as import as salary.

The Oilers and Zack Kassian are finding common ground but not done yet. The Oilers will also talk with pending free agents Josh Archibald, Joakim Nygard and Riley Sheahan.

The New Jersey Devils went to Travis Zajac‘s agent Kurt Overhardt about a potential trade. would bet it was from the Islanders.

“We were presented with something, but Travis was not willing to waive at this time. We’ll see about the future after the season.”

David Backes is not planning on retiring. He has one more year at a $4 million salary.

The Vegas Golden Knights may be looking to improve their blue line. Could the Golden Knights and San Jose Sharks come together on a Brenden Dillon deal? DeBoer is a fan of Dillon.