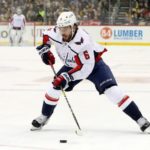 What is the Washington Capitals’ biggest trade deadline need?

J.J. Regan of NBC Sports Washington (mailbag):  Assessing what may be the Washington Capitals’ biggest need is the most essential thing of their trade deadline. Some argue that need is little or no. That may be true. On the other hand, defense seems to be a bigger priority than the power play, etc. A right-handed defenseman remains high on their list. Brian MacLellan has traded for a defenseman every year of his reign so far. Expect little deviation there.

Pending UFA defensemen are far and few between because almost every team thinks they are still in it. New Jersey and Sami Vatanen are still big question marks but could Washington afford that kind of hit?

Some believe the Washington power play could use a jolt from the outside but looks to be a problem that can be solved from within. It boils down to utilizing and getting production from what is there.

NHL.com: Players are looking at new contracts like Matt Murray, Mathew Barzal, Tristan Jarry, and Tyler Bertuzzi. Murray and Jarry are battling for the number one goaltending spot in Pittsburgh currently. Pittsburgh faces an intriguing dilemma there. Detroit expects not to break the bank too badly with Bertuzzi. Also, Bertuzzi and Detroit want to deal with a new contract in the offseason.

Now, Barzal becomes the big question. What will the New York Islanders pay him? It has to be north of what Nico Hischier was paid by New Jersey (so 8 x 8+ AAV)? Barzal’s focus is on hockey but a big second-half will help.

Then, there is Max Pacioretty and the Vegas Golden Knights. They needed the All-Star Break more than any team. This line was telling.

“We have to recharge the batteries here during the break and come back and play the way we’re capable of playing.”

Again, whether that better play comes from within or an acquisition, Vegas has to look over its shoulder after a four-game losing streak entering the break. It expects to be a wild second half.