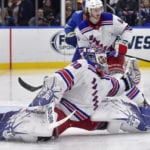 Pierre LeBrun of The Athletic:  With just a month before the NHL trade deadline, here are where some of the major players stand. By division, it looks like this.

Washington is one of the few teams that need little or anything except for maybe a depth piece. Pittsburgh looks to trade Alex Galchenyuk for a pick and/or depth player. A top-nine forward is still possible as Jason Zucker, Tyler Toffoli, and even Tomas Tatar are available.

The New York Islanders are looking for a top-nine forward and maybe a defenseman. Carolina could look towards a Brendan Dillon perhaps. After that, the New York Rangers and New Jersey Devils remain sellers but who will they be selling?

Boston eyes a resolution with David Backes as far as a mutual end to that contract possibly. They eye a top-nine forward like the ones mentioned above. Few expected Ilya Kovalchuk to thrive in Montreal. He will garner considerable attention if Montreal wants to unload him or Tomas Tatar for that matter.

Detroit and Ottawa could be big sellers by the NHL trade deadline but Buffalo is almost stuck with what they have. Tampa Bay is looking for some depth while Toronto seeks a top-4 defenseman with multiple years of term on the deal.

St. Louis and Colorado need little. Perhaps, the Avalanche could use some defensive or forward depth. The NHL trade deadline looms and a team like Dallas needs production from within more than anything else. Teams like Winnipeg, Chicago, and Nashville need time to see where their teams are. Minnesota is the real question mark with Mathew Dumba and Jason Zucker being dangled currently.

The division of parity is anyone’s guess with five teams within mere points of each other. Vegas is a polarizing team. Do they add a top-four defenseman? They would have to send something back almost equal because of cap concerns. Arizona’s big addition likely will be Darcy Kuemper returning from injury. The California teams will be sellers but none of them expect to blow up their rosters dramatically.

NHL’s Phase 2 allows for small-group training
NHL teams should take a lesson from one KHL team’s recent hire
Today in Hockey History: May 21
Toronto, Edmonton and Vancouver vying to be NHL hubs, but there’s a catch
NHLPA board voting on 24-team playoff proposal as the return to play format, source says