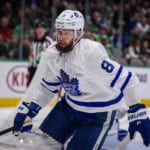 Avalanche may not be able to afford Zadorov

Nick Kypreos: Colorado Avalanche have a pending restricted free agent Nikita Zadorov to keep an eye on between the trade deadline and the opening of free agency on July 1st. Have been hearing that the Avalanche may not be willing to sign him up to a big long-term deal knowing that Cale Makar could cost them more than Thomas Chabot‘s eight-year, $64 million deal.

Maple Leafs and Muzzin getting closer on an extension

TSN: Darren Dreger said that the Toronto Maple Leafs and pending UFA defenseman Jake Muzzin are getting closer on an extension. It’s not done but they are progressing and it could be done by the trade deadline.

“Now, understandably because the Maple Leafs are a cap-strapped team, there is some cap gymnastics at play here. There’s some tagging –room concerns. So they’re working on some different scenarios I would say. But the expectation is that Jake Muzzin will be extended by the deadline.”

Can Canucks Ferland return to his robust style? Lots of moving parts for the Canucks and Markstrom

TSN: Bob McKenzie said that Vancouver Canucks Micheal Ferland will play in the two AHL games and then hopefully a couple of Canucks games before the trade deadline. GM Jim Benning wants to see before the deadline if Ferland can play his robust game. Pierre LeBrun noted early this week that the Canucks could have an interest in Wayne Simmonds.

TSN: Bob McKenzie said there has been contract extension talk between the Vancouver Canucks and pending UFA goaltender Jacob Markstrom but all sides are keeping things quiet. Nothing seems imminent.

The 30-year old Markstrom would like a five-year deal. Would he do four? The Canucks may want to do three years, but they may offer four as they have to some other free agents.

“Why wouldn’t they give four years for the guy who might be their MVP, at least a four-year deal? Then you get into the AAV. What’s it going to be? Is it going to be close to $6 million, less than $6 million? And then there is the expansion draft . You’ve got no-move clauses , no-trade clauses. What’s the future if he does sign? Does it have those things in place? So there’s a lot of moving parts there.”