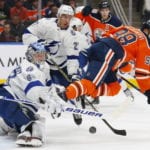 Pierre LeBrun: Canadiens Marc Bergevin and Scott Mellanby were scheduled to be in Colorado.

Adrian Dater: The Maple Leafs are done playing the Avalanche this season.

Scouting the Winnipeg Jets and Chicago Blackhawks game on Sunday

Oilers have held extensive talks with teams about Puljujarvi

Rory Boylen of Sportsnet: Sportsnet’s Chris Johnston said that if the Edmonton Oilers can acquire a scoring forward that has some term left on his contract, they could include Jesse Puljujarvi.

“I think Puljujarvi and a second are probably (Holland’s) two biggest chips to play in terms of trying to bring in more forward depth so I wouldn’t be surprised if Puljujarvi did end up on the move by the deadline,” Johnston said. “There’s also been extensive talks with teams. The New York Rangers showed lots of interest in him through the summer and into the season.

“The Devils have asked about him. Tampa at one point. I think there’s enough history there that the Oilers will be pretty clear on who at least has some interest. And I think he still has some value, not the value of where he was selected obviously, but this is one of the real cards I think the Oilers could play.

“And I do expect Edmonton to be active to at least bring in one more forward.”