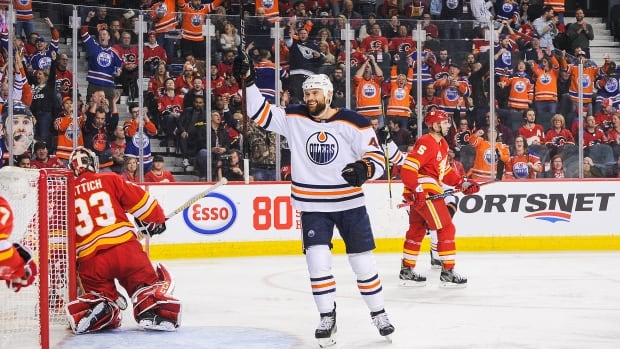 But massive is the difference in the collective mood among the respective fan bases, especially after Monday’s trade deadline.

In Edmonton, the long-suffering supporters are excited — bordering on elated — about the playoff prospects of the overachieving Oilers.

In Calgary, the fans are an angst-ridden bunch, not quite willing to give up just yet on their underachieving Flames.

Both reactions are a direct result of pre-season expectations failing to match reality.

“We’ve got a great nucleus,” Oilers general manager Ken Holland told reporters Monday in Anaheim after a busy day of shopping. “They’ve played hard to put ourselves in a position where we can compete for a playoff spot.”

Have they ever. The Oilers (33-22-7) sit in second place in the Pacific, three points back of first-place Las Vegas with two games in hand.

So Holland pulled the trigger and acquired the following:

“No risk, no gain,” Holland said .”I can sit around and do nothing. I can puddle around, but I felt like I had a chance to help.”

The Oilers shocked everyone — likely themselves included — by storming to a 9-4-1 record in October. The pundits waited for the Oilers to eventually plummet in the standings once their lack of depth caught up to them.

Rob Pizzo tells you everything you need to know about who went where 2:43

It never happened — not even when the Oilers lost captain Connor McDavid to a quad injury on Feb. 8 in Nashville. In fact, they went 3-2-1 in his absence.

“I like that our team comes to work every day,” Holland said. “They compete. We’re playing good defence. We’re finding different ways to win, and we have different people stepping up.

“I felt like I had an obligation to try to pitch in and help out. We’re trying to build a program and certainly we’re in a real race.”

The Flames (32-25-6) are in the same race. Calgary GM Brad Treliving did his part Monday to help lift his team into the post-season.

Defenceman Mark Giordano (hamstring) has missed the past nine games going into Tuesday’s game in Boston. He is expected to return any day, but fellow rearguard Travis Hamonic is out indefinitely with an upper-body injury.

Originally, the Flames wanted to add a top-six forward before the deadline. But the emergence of Andrew Mangiapane — named the NHL’s third star of the week with five goals and assist in three games — has lessened the need.

So Treliving dealt a third-round pick to Chicago for puck-moving defenceman Erik Gustafsson,  and he shipped a conditional fourth-round pick to Los Angeles for bruising blue-liner Derek Forbort.

You buy the soup because you have the milk. We were missing players on the back end, so we had to buy some soup.– Brad Treliving

“Well, you buy the soup because you have the milk. We were missing players on the back end, so we had to buy some soup. And hopefully, the milk up front will carry us through. That’s sort of how I look at it.”

A confusing analogy? Absolutely. But Calgary’s playoff chances indeed rest on their top players — paging Johnny Gaudreau, Sean Monahan and Mikael Backlund — playing up to the numbers on the back of their hockey cards.

The Flames are maddingly inconsistent, but they’re deep up front and show flashes of the form that saw them finish first last season in the Western Conference.

“You can always look outside or you can say, ‘OK, let’s shore up, let’s give ourselves some depth, let’s put some confidence in the people you do have,'” Treliving said. “Our big bullets, in terms of draft picks, we saved in our holster.

“I’m excited. I’m excited we addressed some areas of need.”

That excitement is no match for the nervous delight in Edmonton. At age 34, Green’s best years are likely behind him but he’s still an elite power-play quarterback — vital considering minute-muncher Oscar Klefbom is out with a shoulder injury.

Clearly struggling, Athanasiou has 10 goals and 24 points in 46 games this season. But the Woodbridge, Ont., product collected 30 goals and 54 points last year.

Given his speed, Athanasiou is expected to play on the first line with McDavid.

Ennis, 30, is expected to contribute on the third line. He comes to Edmonton after scoring 14 goals and 33 points this season in Ottawa.

Holland is in no mood to waste a prime year of McDavid and Leon Draisaitl — arguably the greatest fear among Oiler fans.

“We felt that we’d like to do something to put a little buzz into our team,” Holland said. “They’ve played hard all year. They’ve battled and scratched and clawed. We’ve got ourselves in a position where we’re fighting for a playoff spot.”

And now they’re in a better position to win that fight.

Forgotten Former Lighting Players Who Will Shock You
Hacker posts racial slur on fan chat with Black NHL player
Vegas coach Peter DeBoer on the NHL’s coronavirus pause, and coaching a team that hated him
Senators offer use of Canadian Tire Centre and other facilities to help during the pandemic
Cirelli credits AHL development for strong two-way play