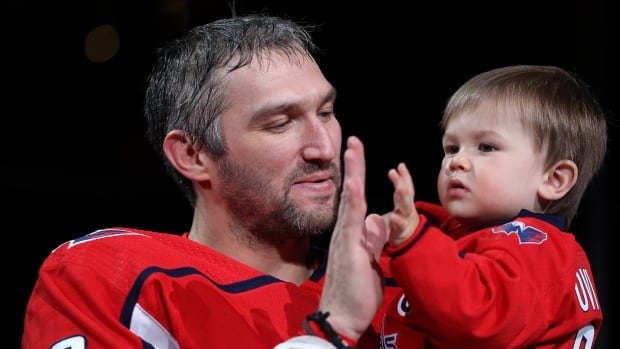 Alex Ovechkin began the night being celebrated for what he’s best at. He ended it doing something much more rare.

Ovechkin scored his 701st goal minutes after being honoured for 700 and added the shootout winner to help the Washington Capitals beat the Winnipeg Jets 4-3 Tuesday for their second consecutive victory. It was just Ovechkin’s 34th shootout goal in 107 attempts over his NHL career.

“Sometimes even I don’t know what I’m gonna do out there,” Ovechkin said. “I’ll take it.”

So will the Capitals. Ovechkin’s 14th shootout winner salvaged a win after they blew a 3-0 lead. It all came following a pregame ceremony honouring Ovechkin for being the eighth member of the 700-goal club and during friend Ilya Kovalchuk’s Washington debut.

“We got a win, Ovi scored the winner, so it’s good to celebrate his 700th goal,” Kovalchuk said.

The events of the evening seemed to spark the Capitals’ four Russian skaters. Evgeny Kuznetsov set up Ovechkin’s goal with a pass from behind the net, Dmitry Orlov recorded his first multiassist game of the season and Kovalchuk had one of the best scoring chances of the night when he was denied by Winnipeg goaltender Laurent Brossoit.

But after a strange sequence got the Jets on the board late in the second on a goal by Nikolaj Ehlers, a turnover by Kovalchuk paved the way for Kyle Connor’s breakaway goal in the third.

“Puck management, I should’ve make a better decision on the [Jets’] second goal,” Kovalchuk said. “I finished minus-2, so I’m gonna watch the video and be better next game.”

Then, with three minutes left, Mark Scheifele went around Orlov, and the puck went in off Orlov’s skate to make it 3-3. That was enough to get the Jets to overtime and earn them an important point in a competitive Western Conference playoff race.

“They stayed with it,” Winnipeg coach Paul Maurice said. “We didn’t quit and they battled and it’s a good point.”

The Capitals won two in a row for the first time in nearly a month and in the process were able to pad their lead atop the Metropolitan Division.

“I think we play a solid game and make a couple of mistakes,” said Ovechkin, who’s now tied for second in the league with 43 goals this season. “Obviously, we want to win regulation, but we’ll take the points.”

Goaltender Braden Holtby was a big part of that. He made 33 saves in regulation and OT and three more in the shootout, which allowed his teammates to breathe and hope to learn something from an inconsistent performance.

“We’ve got to stick to our guns and play to our identity,” said Garnet Hathaway, who ended a 24-game goal drought “It’s something we’ve got to work on and get better at. We made it tough on ourselves again, but we had Holts to back us up and in the future we’re going to do a better job.”