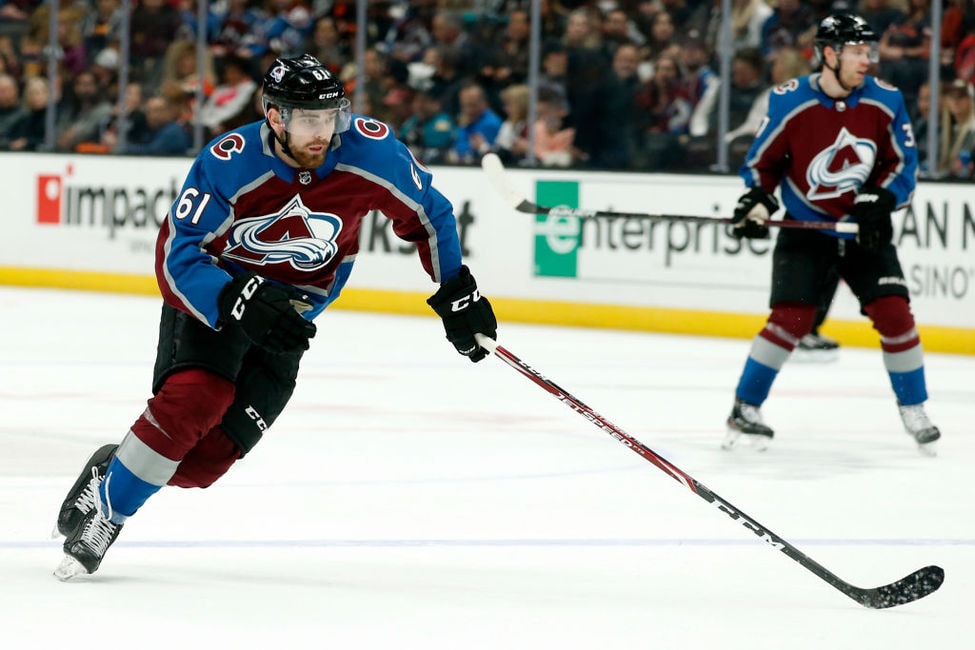 Rookie Martin Kaut fought to reach his debut with the Colorado Avalanche. The 20-year-old Colorado Eagles call-up proved ready for his NHL shot. His efforts pose a question – should he remain with the club once the injured veterans return?

Kaut participated in the 2018 NHL Draft combine hoping to find a hockey home. The combine lasts for a week. They begin with a series of interviews with NHL teams and finish with a rigorous set of fitness tests. For Kaut, the talented Czech received some unexpected news near the end of the week that changed his hockey path.

While testing to clear the young prospect to play, medical tests revealed Kaut had a heart condition. He was going to need surgery if he wanted to play in the NHL, even though the condition wasn’t considered serious. (from ‘Heart scare behind him, Colorado Avalanche top prospect Martin Kaut eager to start season with Eagles,’ Coloradoan, 09/28/2018) The young man ended up missing the skating portion of the combine to schedule surgery. The procedure forced him to spend the subsequent two months resting.

Kaut
was afraid his situation could hamper his NHL dream and his draft status.

Nevertheless, the Avalanche selected him 16th overall, just two weeks after Kaut’s heart surgery. The team researched his situation, reviewed all the medical records, ran additional tests, and relied on the medical expertise of doctors and their head trainer before choosing the young forward in the first round.

After the draft, general manager Joe Sakic explained why they selected Kaut despite the heart issue.

He plays a complete, two-way game. We really like the way he competes, he’s strong on the puck. He’s got a great shot. He’s a pure goal scorer, and we just like the upside and what he can bring to our club.

The
promising prospect was cleared to attend the subsequent development camp with some
restrictions. But while he had cleared one hurdle, others lay before him.

He still had much to learn even though he entered the Czech’s men’s league at the age of 17. Kaut hadn’t really played on North American ice and he struggled with speaking English, both significant hurdles for a career in the NHL.

Related: Avalanche Bet on Their Core at the Trade Deadline

Kaut recognized the challenges and embraced the learning process without complaining. He spent last season with the Avalanche’s AHL affiliate, the Colorado Eagles, figuring out how to play on the smaller ice surface.

He also encountered a bit of luck. Czech goaltender Pavel Francouz joined the organization in the spring of 2018 and also needed to learn to play on North American ice. Recognizing how difficult it might be for a young man in a foreign country to learn both the language and the culture, Francouz and his wife opened their doors to welcome the young rookie for meals and encouragement.

Francouz,
while new to North America, previously backstopped the Czech Republic in four
world championships and one Olympics. He’s also a veteran of the KHL. Married
and with a baby on the way, the goaltender made the effort to mentor the young
forward through their first year on the Eagles together.

Kaut’s
first AHL year proved challenging. He entered the season still working back
from the surgery and his conditioning needed improvement. But he also showed
flashes of what made him a promising prospect. He could find pucks and press through
for scoring chances when others stayed mired in the neutral zone. However, he
was inconsistent. He scored 12 goals and 14 assists during his 63 games last
season with the Eagles, not exactly the stellar performance he was aiming for.

Breaking
Through to the NHL

Kaut showed up to the 2019-20 training camp in better physical condition than the previous year. He worked hard but still had occasional lapses.

When
asked about his goals for the season, he said, “I hope to make the Avalanche. I
hope. But I don’t know.”

The
forward returned to the AHL Eagles for the beginning of the season while his
friend, Francouz, earned the backup role in net for the Avalanche. Again, Kaut
struggled with his season’s start, battling injuries.

The forward only played 13 games by Dec. 23, when he scored his first AHL goal of the season. Some analysts began questioning whether Kaut could play on an NHL top line. However, he began heating up in the new year, racking up a total of 5 goals and 11 assists for the season, with 12 of those points coming in the last 14 games.

Occasionally, a player performs unevenly on the AHL level but thrives on the NHL stage. Kaut may just be such a player.

An injury-beleaguered Avalanche team vying for first place in the Western Conference called up the young rookie. Coach Jared Bednar’s decision to put him on a line with veteran center Pierre-Edouard Bellemare appears inspired. Kaut has improved with each game.

He’s earned increasing ice time over his first four NHL contests. Kaut notched his first NHL assist in his second game up and tallied his first NHL goal in his fourth game, a power play beauty off a rebound against the Buffalo Sabres. He earned first star of the game recognition for his solid performance. While the sample size is small, his confidence appears to be growing with each game.

Kaut battles for the puck, drives the net, and shows good awareness. Yes, he’s still adapting to the speed of the game, but he’s quick to respond and doesn’t mind hustling through traffic to open up opportunities. If he starts to believe he belongs in the NHL, who knows what’s in store for his game?

Kaut’s progression raises a big question for the Avalanche. He is on an entry-level contract (ELC). If he plays nine games or less in the NHL, his contract will slide, meaning the team can keep him as a cost-controlled asset for an extra year. However, if he plays 10 games or more, they will burn the first year of his ELC.

Keeping
Kaut up for the 10 or more games means his initial deal will end at the same
time as Gabriel Landeskog and Cale Makar, setting the stage for a potentially
expensive offseason in two years.

If the veteran forwards aren’t ready to return after Kaut’s next five games, the Avalanche face a different challenge. Who will fill his role? He brings an edge that the team needs. With the playoffs looming and a chance at top seed, the injury situation may well determine his fate.

The Avalanche may not be able to afford to send him down until they get all their forwards back. Coach Bednar said he expected their injured players to return mid-March “or later.” Sakic’s decision will likely depend on where the club stands in the division race and when their wounded stars return.

In
the meantime, Kaut possesses the opportunity he’s dreamed about. If he
continues to progress, he could make the decision a very difficult one for the
organization.

His perseverance brought him to the big stage. Now he owns the chance to prove he belongs in the NHL. As if the playoff push wasn’t interesting enough, Kaut’s pursuit of his NHL dream adds one more exciting piece to an already exciting Avalanche season. Stay tuned.