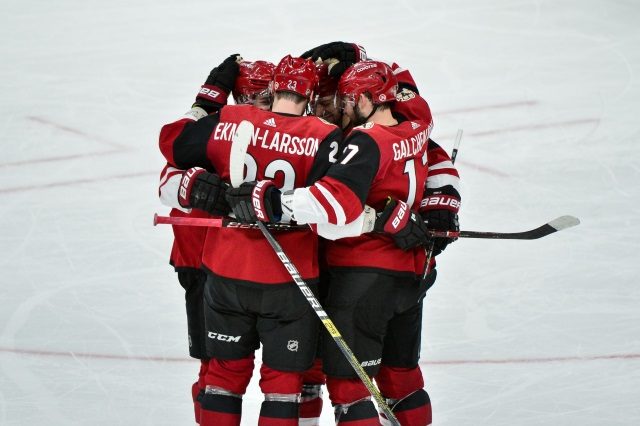 Craig Morgan of The Athletic:  Again, Arizona faces uncertainty from a multitude of fronts. One of them will be what they do with John MacLean. Will they keep him or let him go? From a free agent standpoint, Richard Panik and Darcy Kuemper expect to test the market.

One of the keys to next season will be how Nick Schmaltz returns and plays. However, the Arizona Coyotes need help now. Salary shed from the Mike Smith deal and the Dave Bolland buyout come off the books. There may be other news on the ownership front as well. That will be something to monitor in the coming weeks, even months. Injuries affected goal scoring totals but external help could not hurt.

A Darcy Kuemper extension will be another item to look at as well. The goalie showed he could be the starter. Do they wait or does John Chayka pay? Expect the Arizona Coyotes to make a few moves but nothing Earth shattering.

Michael Russo of The Athletic:  Fenton makes moves to shake up management structure. First, two long-time Chuck Fletcher holdovers were let go. Then, Andrew C. Thomas was let go. The argument with Thomas was that Fenton did not listen to Thomas much, if at all.

Bruce Boudreau returning for a fourth season is a foregone conclusion but Bob Woods and Darby Hendrickson could be casualties. Fenton changing the front-office structure makes sense as this offseason is an important one. The real question is this. Is Fenton rebuilding or retooling? The summer should answer that.

The battle for Todd McLellan

Dennis Bernstein of The Fourth Period:  Los Angeles and Buffalo vie for the services of Todd McLellan as coach. Who honestly has the upper hand? Some sources say Los Angeles but a few say Buffalo. One thing is clear. The Kings made an offer at some juncture to McLellan. Now, does he accept the proposal?

There was this nugget from Ed Duhatsheck on the Buffalo side. Unfortunately, as the old saying goes, so which is it? Apparently, a resolution happening on Tuesday is possible considering teams want to move on coaches. Either way, Todd McLellan clearly is in demand.