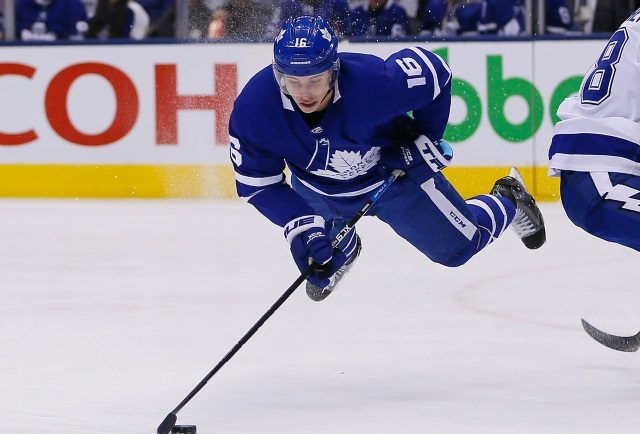 2. Trade a roster player or two – William Nylander has a $6.96 million cap hit through 2023-24 – Frontloaded contract paying out $20 million by July 2nd. The St. Louis Blues and Carolina Hurricanes have kicked tires before, and maybe the LA Kings and Minnesota Wild could have interest this offseason.

Nazem Kadri – $4.5 million cap hit through 2021-22. Reasonable contract and provides nice depth. Can they trust him after two playoff suspensions?

Connor Brown – $2.1 million cap hit for one more year. His name will likely be in the rumor mill again at the draft.

Nikita Zaitsev – $4.5 million cap hit through 2023-24 – He’s their only regular right-handed defenseman and hasn’t lived up to the contract the Lou Lamoriello gave him.

3. Bridge, trade, or let an opponent offer-sheet the RFAs – RFAs include Andreas Johnsson, and Kasperi Kapanen.

4. Find someone to take on Nathan Horton‘s contract – will need to add a sweetener to a team looking for help to get to the salary floor.

Comparables for Marner are $10.5 and below

“Without an answer on Mitch, we’re going to kind of be in a stalemate, right?” Dubas said Thursday. “It is a top priority because we’re not going to jump around and chew up our cap space that we may need for Mitch with fringe signings, either. It’s important. We’ve just got to get to work on it and get it done.”

The Leafs need to tie up the Marner situation before July 1st and offer sheet season. There is some skepticism around the league that Marner would get an offer sheet of $11 million or more.

Marleau plans on being back next year

Luke Fox of Sportsnet: The 39-year old Patrick Marleau plans on playing next season for the Maple Leafs.

“I haven’t heard otherwise. It’d be good to be back and continue with this group,” Marleau said. “The results weren’t what I expected or what I’ve come accustomed to. That’s on me, and I know I can do better.

“So, it’s an opportunity to come back next year and prove that I still have it, and I feel confident in my abilities to do that.”

Marleau realizes the contract situation the Maple Leafs are in and knows that he could be approached about his trade protection.

“Then we’d have to cross that bridge,” Marleau said. “It’s tough to speculate.”

Lightning bounce back with emphatic blowout over Avalanche in Stanley Cup final
What the Lightning need to do to get back in the Stanley Cup Final
Wild 2022 Player Report Card: Jon Merrill
Canucks Have Options for Handling Brock Boeser’s Future
Wild Should Target These 3 Low-Cost Free Agents