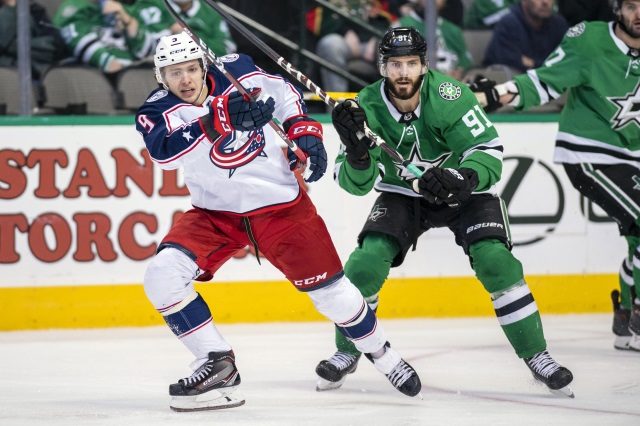 Keys to the Dallas Stars offseason

Emily Kaplan and Chris Peters of ESPN: Looking at the keys to the Dallas Stars offseason.

Spezza likely won’t be back. One of Lovejoy or Polak could be re-signed. The Stars should try to re-sign Zuccarello.

Add a scoring winger – The likely won’t have a lot of salary cap space to play with this offseason and are without their second and third-round draft picks. They need to find some more scoring somewhere.

Emily Kaplan and Chris Peters: Looking at the keys to the Columbus Blue Jackets offseason.

One last push to re-sign Artemi Panarin and Sergei Bobrovsky or find their replacements – Panarin has said he wants to test the free agent market with the Florida Panthers and New York Rangers as the front runners. If he goes, they’ll need to go after another big named free agent.

Bobrovsky may want to stay but they were far apart on money and term during early extension talks. He is likely gone after a strong playoff.

Will the be able to re-sign Matt Duchene? It looked like he fit in with their system but is he interested in re-signing long-term?

Will they be interested in re-signing Ryan Dzingel? Dzingel went to college at Ohio State and there was some speculation that he’d like to stay. His ice time diminished in the second round and he was a healthy scratch fpr one game. May test the market first.

Tortorella and Kekalainen – GM Jarmo Kekalainen gambled his future and the teams with this deadline moves. It seemed like Tortorella’s methods were growing old during the regular season but things changed in the playoffs. Both will likely be back.