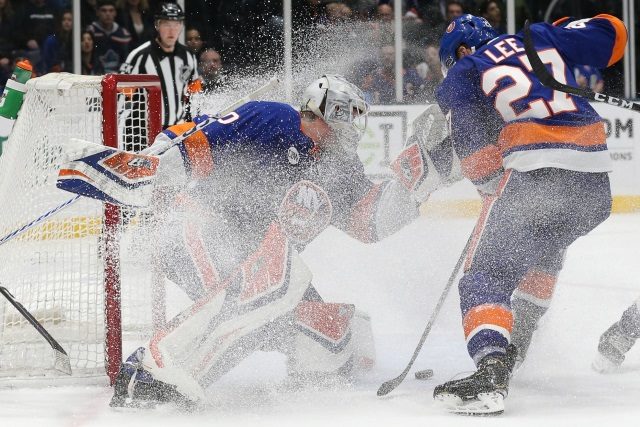 Plenty of free agent decisions for the Islanders this offseason

Brian Compton of NHL.com: The New York Islanders have pending unrestricted free agents in Anders Lee, Jordan Eberle, Brock Nelson, and Robin Lehner. GM Lou Lamoriello said they’d like to have them back but will have to see how they can fit them in. The players also need to decide if they want to come back.

Lee said that he expects contract extension talks between his agent Neil Sheehy and Lamoriello will continue in the upcoming weeks.

“Neil’s been out here a bunch this year, and his conversations with Lou will continue,” the 28-year-old forward said. “They’ll pick up here now and we’ll go from there. Lou and him will get together and have their conversations, and then we can move forward. Nothing’s really changed.”

Lehner said he loves the team and hopes that he’s able to be back next season but knows there are no guarantees in business.

“I’ve got to kind of digest everything and see where everything’s at. Obviously I’m happy I’m here and I’m feeling good. I’m happy, but there’s a long road left for me to walk. I’m just going to try to find some type of stability moving forward.”

Andrew Gross: Lee on free agency: “People know how I feel about this place. Right now Lou and Neil are going to figure that out and that side of things will take when they come.”

Jared Clinton of The Hockey News: Arguably the New York Islanders biggest offseason question is what to do with free agent goaltender Robin Lehner.

The Vezina candidate is coming off a one-year, $1.5 million deal. He could get upwards of $4 million on the open market. He’s not a lock to return but they will talk term and money.

Top goaltending prospect Ilya Sorokin could be heading to New York after next season. Thomas Greiss has another year at $3.33 million.

A long-term deal for fellow pending UFA Anders Lee could cost the Islanders around $7 million a season.

Free agent forward Jordan Eberle could be looking for a change of scenery. He’ll likely be looking around similar money he made this past season – $6 million per.

The Islanders will also look at extensions for Brock Nelson and Valtteri Filppula.

The Islanders could also use a top-four defenseman.