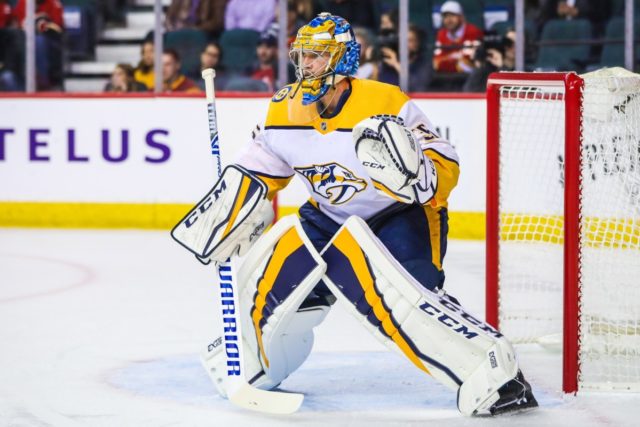 Does Pekka Rinne have an expiration date?

Paul Skrbina of The Tennessean:  This quote says it all.

“I’m healthy. I don’t want to put any numbers, but at the beginning of the season, I signed two more years. In my head, that gives me a two-year window to win. I don’t look past that.”

Pekka Rinne repeated the sentiment later in the media scrum. It is likely the torch will be passed to Juuse Saros, who is on a cap friendly deal.

What could Roman Josi command?

Paul Skrbina of The Tennessean:  Roman Josi becomes eligible for an extension July 1st. It seems that Josi will not hold out for a “few dollars more”. However, the Ryan Ellis extension kicks in next season at $6.25 million AAV for eight seasons. Then, there is P.K. Subban, who gets paid $9 million per year. This next Josi deal raises the cap hit for the defensive core.

Even Josi acknowledges change is coming but the 28-year old expects to be part of the Nashville roster for years to come. Again, what will that price and repercussions be?

Adam Vingan of The Athletic:  As speculation trickles in, the curiosity peaks as to what the Nashville Predators could acquire in a P.K. Subban trade. Pekka Rinne felt there would be change and this would represent a big one. His value may not be as high as it was after last season but a team like Toronto might kick the tires among others.

Toronto has a surplus of good, young forwards including Andreas Johansson and perhaps William Nylander. The problem is the salary cap.

The Vancouver Canucks tried to trade for Subban during the 2016 draft but could not. Also, the problem here is Vancouver again may not have the pieces again.

Philadelphia dangling Shayne Gostisbehere would be intriguing. How desperate is Nashville here?

What to do with Kyle Turris?

John Glennon of The Athletic:  Turris fell off a cliff statistically with 23 points in 55 games. The question is simply what does one do with a player who has five years remaining on his deal at $6 million AAV?

Was it the foot injury or is Turris going to continue to lag far behind his recent numbers? Kyle Turris could be traded or bought out but those will be messy.

It may be best for Nashville to stand pat and ride it out.