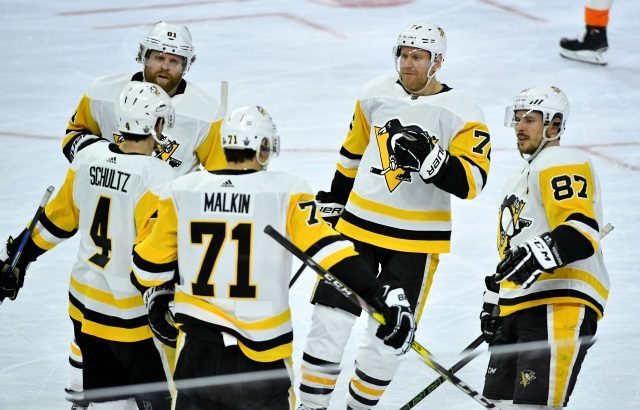 An offseason of change coming for the Penguins, but how big is the question?

Rob Rossi of The Athletic: The Pittsburgh Penguins have not approached Evgeni Malkin or his representatives about a potential trade nor asked for any lists of teams that he’d be will to move too.

Malkin has a no-movement clause and holds all power on any potential trade. Malkin has only said he wants to play for the Penguins.

If the Penguins were to trade him, the return likely wouldn’t be full value for him.

The Penguins are not shopping defenseman Kris Letang and/or Phil Kessel yet. Things could change the closer we get to the draft.

Kessel has an eight-team trade list, and the Penguins believe he would get some trade interest.

If there were any ‘hockey deals’ to be made by Rutherford involving any of their big-named players, he would likely consider it.

If the Penguins were able to sign defenseman Justin Schultz to an extension around his current $5.5 million, they would likely do it. He could be a surprise trade candidate though.

The Penguins may be looking at add another first round pick to help bolster their prospect list.

TSN: Penguins Evgeni Malkin has three years left on his contract at a $9.5 million cap hit.

“I’m used to the talks (that I could) get traded so it doesn’t get me nervous,” Malkin told Russian reporter Semyon Galkevich, as translated by Sport-Express’ Igor Eronko. “Now I’m on Team Russia and I’ll try to prove I’m good. I had a bad season. Sometimes criticism is justified. This time it’s probably justified.”

Frank Seravalli: Penguins GM Jim Rutherford said just after the season that “there could be changes, big changes.”

Winger Phil Kessel is likely the top candidate for the Penguins to move.

Kessel has three years left on his deal a $6.8 million cap hit. The Toronto Maple Leafs have retained $1.2 million.