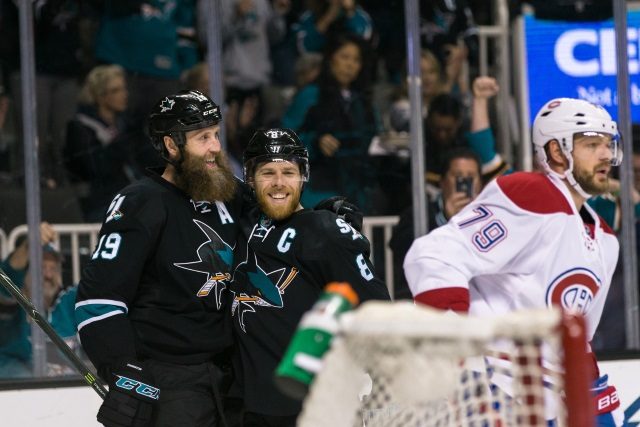 Pavelski hopes to re-sign with the Sharks

Curtis Pashelka of The Mercury News: San Jose Sharks Joe Pavelski is a soon to be 35-year old pending free agent. He’s hopeful that it will be with the Sharks.

“Am I concerned? I don’t know. I know I’m going to be playing hockey next year. Hopefully it’s going to be here,” Pavelski said Thursday. “We love it here. I think something will happen, who really knows, but coming off a lot of emotions coming through the playoffs and that round, we’ll sit down and take a look at what will happen here. We’re going to be alright, I think, regardless.”

The Sharks have 15 players under contract at about a $58 million salary cap hit. He realizes the business side of things.

Kevin Kurz: Pavelski is “pretty confident” that he’ll be back with the Sharks next season, but adds it’s “not about dotting the I’s yet. We love it here, we really do. Love playing here. I’m sure things will move along and we’ll have talks and see where we’re all at.”

Thorton will have time to decide on his future

Tracey Myers of NHL.com: If Joe Thornton decides to play another season it would only be with the San Jose Sharks.

Thornton will be 40-years old on July 2nd. GM Doug Wilson will give Thornton all the time he needs to make a decision.

“He can have all the time he needs to make whatever decision’s right for him, but we love him,” Sharks general manager Doug Wilson said. “I’ve been in this business a long time, I’ve never met anyone like him and we cherish the days we have him. Whatever decision he makes, we’re there for him.”