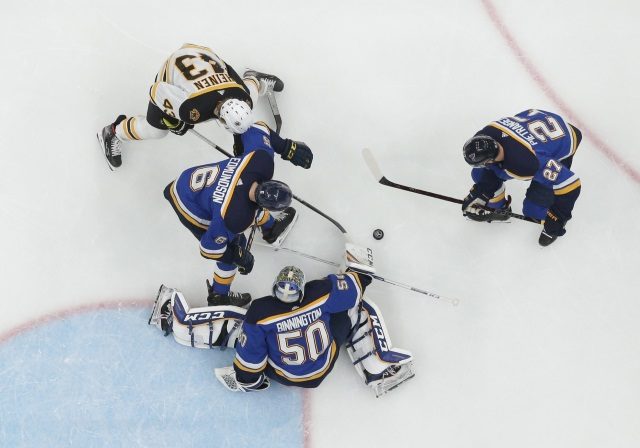 Tom Timmermann of the St. Louis Post-Dispatch: (mailbag) With the St. Louis Blues salary cap situation and young players already under contract, not easy to see Patrick Maroon coming back unless it’s on a PTO.

Believe the Blues should be looking to re-sign Alex Pietrangelo and Brayden Schenn to contract extensions. They only way they consider letting them go is if they are out of the playoff race at the deadline, and it’s doubtful they will be in that position. If they need to slightly overpay them, that is okay if that is what it takes.

If Jordan Binnington shows that he’s not a one-hit wonder, and Ville Husso shows that he can be a dependable backup, then they may look at moving Jake Allen midseason. If either of those aren’t met, then Allen likely remains.

With some questions about the future and age of some of the Blues defensemen, it might be a reason to try and sign Joel Edmundson to a three or four-year deal. He could get around $4 million on his next deal.

Ivan Barbashev‘s next deal could be in the $1.5 to $2 million range.

Jeremy Rutherford of The Athletic: The St. Louis Blues are down to two remaining free agents – Joel Edmundson and Ivan Barbashev – after they entered the offseason with ten.

The 23-year old Barbashev will be looking for a bit of raise from his $832,000 after posting 26 points in 80 games last season. Barbashev doesn’t have a lot of leverage, and agent Dan Milstein wasn’t able to provide any update.

Edmundson is scheduled to have an August 4th arbitration hearing. Edmundson went through the arbitration process last year.

The Blues have around $5.75 million in salary cap pace and Edmundson it’s possible that he could be traded.

“I see everything on Twitter,” Edmundson said. “I know what everyone is gossiping about, but honestly, there’s nothing I can do about it now. I try not to think about it. It’s a business, it’s part of the job, and I stay positive through times like this. Whatever happens happens, but I definitely want to be back in St. Louis. I love it there.”