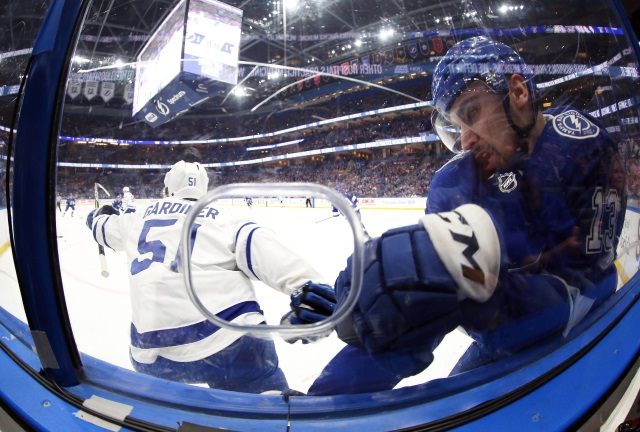 Gardiner may not be waiting on the Maple Leafs

Maple Leafs Hot Stove: Elliotte Friedman on Sportsnet 590 said that he doesn’t think that UFA defenseman Jake Gardiner is waiting on the Toronto Maple Leafs. A short-term deal with the Leafs may not help him out as he’d basically be on the 3rd pairing and his power play time may be limited.

“I’ve heard the rumours that he is waiting for a team to make a move. I do think there is some interest in him. I think Arizona has had some interest in him. I do wonder about Buffalo. If they do make the Ristolainen move, I wonder if that is a possibility. I just don’t know if it’s going to be as big as he hoped for it to be.”

He still may want to sign with the Maple Leafs, but it likely wouldn’t increase his future value.

Adrian Dater: “I said this once before but it bears repeating: teams are much more vulnerable to an RFA offer sheet the closer to opening night happens. Every day that goes by, they lose a portion of their 10% cap overage they get in offseason.”

RFAs limiting what some teams can do

Maple Leafs Hot Stove: Friedman hasn’t heard anything about any other moves the Maple Leafs might be looking at doing.

RFAs that sign after the start of the season would have a higher salary cap hit, which some teams are slightly worried about. It could be holding up other deals as well.

“The strategy that they’ve got with the long-term injuries is very fascinating. The other thing, too, is if he signs after the start of the season. We saw this with Nylander. The cap hit goes up for this year. That has got a few teams kind of worried.

I know of at least one team out there, and they didn’t really confirm it and they didn’t really deny it, either, that passed up another move because they have an RFA. They were like, “If our guy signs after the season, that cap hit is going to go up this season and we don’t know what exactly the amount of room we have is.”

I think that is the other thing Toronto has to do with. Let’s say, for example, he signs for 3×8. If he signs after the season starts, that eight is more this year. You have to deal with that, too.”