As the Edmonton Oilers reclaim their dressing room from the Canadian team and Rogers Place from the world junior men’s hockey championship, training camp questions follow them to their digs.

Camp might not be long enough to answer them.

Will Zack Kassian stay on Connor McDavid’s wing, where does Jesse Puljujarvi fit in on his Oilers re-entry and how will Edmonton compensate for the loss of top defenceman Oscar Klefbom to injury?

“I would say with a short camp you’re certainly trying to get as much knowledge as you can and you’re trying to find some continuity, but the reality is you’re probably not going to know until you’re a few games into the season where all the parts fit the best,” Oilers head coach Dave Tippett said.

The Oilers open the 2020-21 season shortened by the COVID-19 pandemic with back-to-back games at home Jan. 13-14 against the Vancouver Canucks.

Edmonton, Vancouver and the rest of Canada’s NHL clubs make up the “Scotia NHL North” division. They’ll play each other a lot over a 56-game schedule.

The Oilers skated at a local college to start camp while the world junior tournament that ended Tuesday occupied the four-year-old Rogers Place.

Their palatial dressing room received a lot of social-media play while host Canada occupied it.

“One of the big things about playing in Edmonton is the brand new facility we get to be a part of,” goaltender Mike Smith said.

“I think some of the new guys are excited to move back to Rogers Place and get back into kind of a normal routine.”

WATCH | I was in net for… Auston Matthews’ four-goal game: 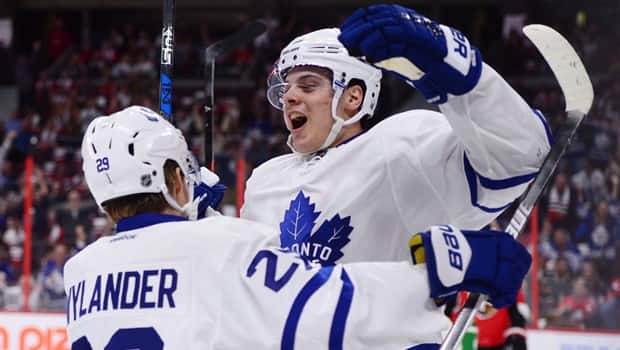 In episode 10 of our series, Rob Pizzo speaks to former Ottawa Senators goalie Craig Anderson about one of the most talked about debuts in hockey history. 6:26

Edmonton was quickly ousted from the post-season in their own building in August when they fell in four games to Chicago in a qualifying-round series.

“I don’t think you’re going to have for certain everything in place on the day you start the regular season,” he said.

“There will be some decisions open to change in a hurry if they don’t work out.”

Klefbom is expected to miss the entire season with a shoulder injury. Caleb Jones has paired with Adam Larsson in camp for a potential partnership on Edmonton’s back end.

“There certainly is an opportunity in front of Jones,” Tippett said. “Hopefully he takes advantage of that.

“He’s playing as a confident NHL player instead of a player just hoping to make the team.”

Competition to play with McDavid

Kassian was quiet in both departments in the post-season with zero points and one minor penalty in four games.

The 29-year-old admits there’s hundreds of NHL players who would love to play on the same line as McDavid.

“Whoever can slide in on the right side is going to be happy about it,” Kassian said. “He’s the best player in the world.

A few things have changed in the Oilers organization since Puljujarvi was last in it.

Edmonton’s fourth overall pick in the 2016 NHL draft is forging a relationship Tippett, while the six-foot-four, 204-pound winger reacquaints himself with former teammates at training camp.

The 22-year-old Finn spent the last season and a half with the Finnish elite league’s Karpat.

Puljujarvi has skated on a line with newcomer Kyle Turris at centre and left-winger Josh Archibald.

“I have a relationship with Turris, but a player like Jesse, I’ve talked to him on the phone a few times, but it’s good to get the in-person and get a feel for each other,” Tippett said.

“You get a feel for what they can do on the ice, where the chemistry is going to fit on our team.”