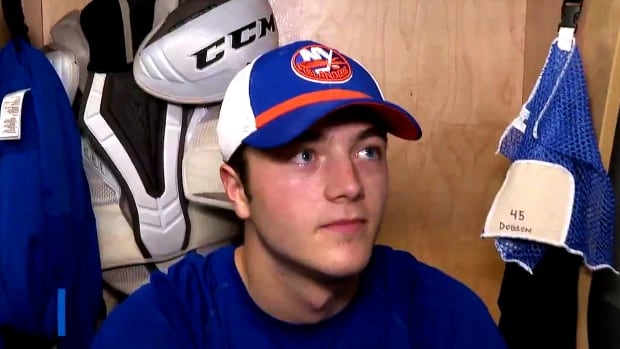 New York Islanders general manager Lou Lamoriello had some advice for his prized defence prospect Noah Dobson after the P.E.I. native ended another long season of junior hockey last spring by winning his second straight Memorial Cup before attending the Islanders mini-camp at the end of June.

“He’s played a lot of hockey over the last couple of years and he’s had tremendous success, I might add, but he should get some rest,” Lamoriello said.

And that’s just what Dobson has been doing. Golfing, going to his two favourite P.E.I. beaches — Thunder Cove and Chelton — and hanging out with family and friends, including his best friend and neighbour in Summerside, Carson MacKinnon.

But now, with the Islanders NHL rookie training camp less than a month away, it’s go time once again.

The six-foot-four Dobson has been training six times a week and back on the ice a couple times a week as he prepares for his next goal of playing in the NHL.

He leaves for New York on Aug. 25, with rookie camp opening Sept. 6 before the regulars arrive.

It’ll be Dobson’s second camp, and once again there will be some familiar faces around — Charlottetown’s Ross Johnston signed a four-year contract with the Islanders in 2018 and his neighbour, MacKinnon’s older brother Ryan, played last year for their minor league affiliate, the Bridgeport Sound Tigers.

“It’s definitely nice to have some P.E.I. ties at camp with me, just for a familiar face,” Dobson said. “It makes it a lot better and makes you feel a lot more comfortable.”

He’s very humble, very sincere, very team-orientated, very unselfish as a player on the ice and certainly respects his teammates and the way he treats other people.— Islanders GM Lou Lamoriello

Lamoriello said Dobson, a first-round draft pick in 2018, will have “every opportunity” to crack the Islanders lineup out of training camp.

“We think extremely high of him and it’s obvious where we drafted him two years ago,” Lamoriello said.

Lamoriello said one of Dobson’s biggest strengths is his “extremely-high” hockey IQ and how he makes other people around him better players.

“He’s very humble, very sincere, very team-orientated, very unselfish as a player on the ice and certainly respects his teammates and the way he treats other people,” he said.

Dobson said he doesn’t feel any added pressure to make the team after being a first-round draft pick.

“I think everyone has different paths getting to the NHL, whether it’s after one year of junior or right from the draft or a couple of years and you play AHL a bit first, so I don’t really feel pressure in that way,” he said.

“Everyone’s different in their own way. I know what I’m capable of and set expectations for myself and I want to perform to the best capability I can.”

Dobson still has another year of junior eligibility — he doesn’t turn 20 until January — so if he doesn’t make the NHL this fall he’ll go back to the Rouyn-Noranda Huskies of the Quebec Major Junior Hockey League.

It’s safe to say that wherever he plays, his team will be happy to have him.