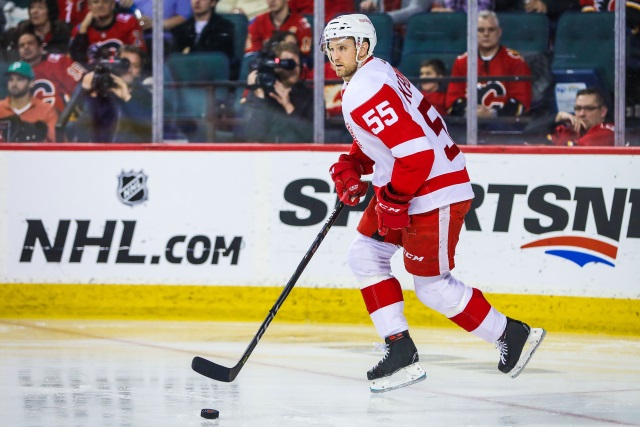 Scott Cruickshank of The Athletic: Calgary deals with a devastating blow to their defense as Jusso Valimaki tore his ACL. This means Valimaki may miss the entire 2019-20 season or a good portion of it.

Worse, Jusso Valimaki will have to wait for surgery as he is over in Europe currently. Calgary team doctors flying him to North America is a must so they can oversee the operation and subsequent recovery. The extent of the ACL tear will not be known until then. In the meantime, TJ Brodie going off the trade market appears likely.

Ted Kulfan of the Detroit News:  Detroit expected to need to work on their defense over the next few seasons. The Red Wings finished in the bottom third of the league in several key categories — including the penalty kill.

It appears that Patrik Nemeth and Danny DeKeyser are the only Red Wings’ defenseman with much of a future in Detroit. Trevor Daley, Jonathan Ericsson, and Mike Green are all expendable if they stay healthy. Niklas Kronwall retiring would surprise few at this point given all his knee issues.

Filip Hronek made big strides late last season and expects a bigger role in Detroit. Also, Dennis Cholowski could crack the roster along with Madison Bowey and Oilwer Kasky. Again, this is a Detroit roster making major chances on its defense.

Up close time with David Poile…

Joe Rexrode of The Athletic:  David Poile is under fire for the first time in a long time. Making the PK Subban trade to subsequently sign Matt Duchene was quite a gamble. Now, he has to extend Roman Josi and that will cost dollars and maybe an NTC of some sort as well.

The power play must be fixed but was Subban the scapegoat or are the problems still there? It is a question which is a burning one. Furthermore, coaching addition Dan Lambert will address and make changes but again is that the answer?

Players like Mikael Granlund and Kyle Turris bouncing back would be optimal for Nashville. Poile gambling on a lot going right in the face of wrong sounds more like a last stand than a long-term plan. Playoff success and the process are a battle as David Poile says and the former must win out.