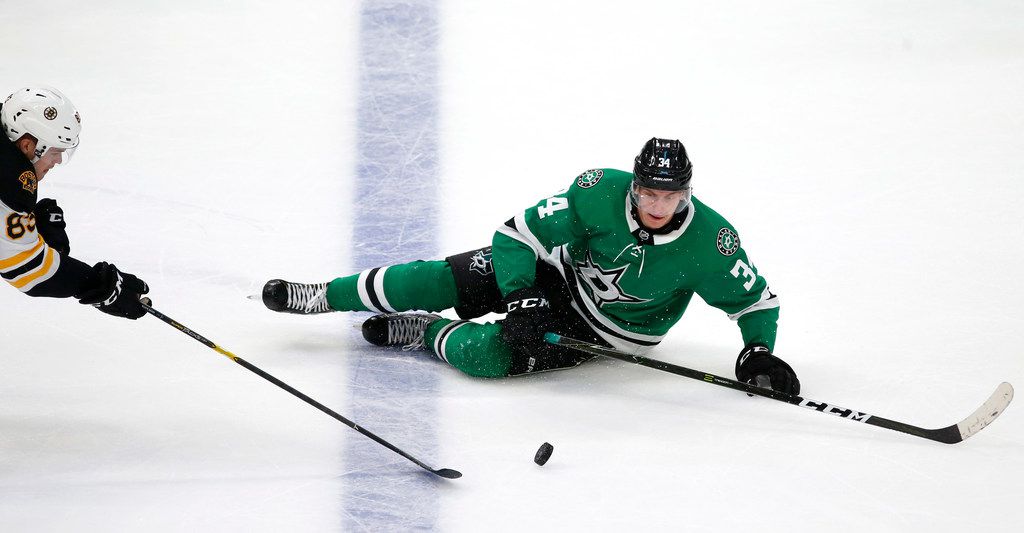 FRISCO — The last player to make the NHL roster is the first player off it for the Stars.

Denis Gurianov, a week removed from making the Stars roster out of training camp, was sent down to AHL affiliate Texas on Friday morning. Gurianov was a healthy scratch in Dallas’ last two games and received just one shift in the third period of his last game in Detroit on Sunday.

Gurianov played three games for the Stars, averaged 9:20 of ice time and did not register a point. He played for Texas on Friday night at Iowa.

“Very similar to Roope Hintz [last year],” Stars coach Jim Montgomery said. “He’s got to go down and earn his way back, and he’s got to become a confident player with the puck again. That’s why he’s gone down there and we fully expect him to do that.”

Hintz is the gold standard for the Stars development system after last season. He made the team out of training camp by scoring three goals in six games, and slotted in on the team’s fourth line. After three trips to the AHL, Hintz finally stuck in the NHL and morphed into a top-six forward for the Stars down the stretch. He was arguably their best forward in the playoffs, and already has four goals in five games this season.

Should Gurianov follow a similar path, the Stars would be in good shape.

But Gurianov didn’t show the type of training camp Hintz did a season ago (he had zero points in six games) despite Montgomery imploring bubble forwards to make an impression on the coaching staff. Gurianov wasn’t involved on either the power play or the penalty kill.

There are bright spots for Gurianov: His speed plays at any level of hockey, he’s coming off his best North American season last year in the AHL, and he flashed the ability to create during Saturday’s loss in St. Louis. His underlying possession numbers (in a small sample size) are encouraging.

Perhaps he does follow Hintz’s footsteps and becomes an offensive threat for the Stars. At this point, though, the Stars want Gurianov to rediscover his game in the AHL.

“It just looks like he doesn’t want the puck,” Montgomery said. “He’s just not comfortable. That’s primarily it.”

The most glaring example came in Detroit, when Gurianov’s failed clearance kept Esa Lindell on the ice and allowed Anthony Mantha to blow by him at the end of his shift. He played 51 seconds after that play. While benching, scratching, then reassigning a player because of one mistake is extreme, it’s an accumulation of items working against Gurianov.

Gurianov’s subpar preseason allowed him to make the team only because no other forwards impressed enough during training camp to overcome the head start the 2015 first-round pick was given.

Since then, Nick Caamano and Joel L’Esperance have each been recalled from the AHL and scored goals. Rhett Gardner has been a key penalty killer (two minutes a game) in the absence of injured penalty killers. Justin Dowling played on the power play and has to pass through waivers, unlike Gurianov. And Mattias Janmark’s strong play has earned him a spot in the top-six.

Now, with Jason Dickinson ready to return from an upper-body injury, there is no role available for Gurianov.

Dickinson missed the last week after getting hurt in the first period against Boston and will play against Washington on Saturday night. On Friday afternoon, Dickinson practiced on a line with Radek Faksa and L’Esperance.

“It’s a little bit deflating when it happens in the first game so early in the season,” Dickinson said. “Obviously, you’re all hyped up ready to go and all of a sudden, you’ve played five minutes and you’re on the shelf. It’s nice that I was able to get back quick enough and not have to linger any longer and waste more time.”

— Friday was the Stars’ first practice during the regular season after playing five games in the first eight days.