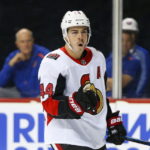 Ian Mendes of TSN: The soon to be 27-year old Jean-Gabriel Pageau is off to a hot start and is in the final year of his deal. The pending UFA said they are not having any extension talk right now.

“No. No talks right now,” Pageau said Thursday when asked if there are any ongoing negotiations with the Senators. “It’s not in my main focus to be honest. I barely think about it. I’m taking it day-to-day here, trying to give my 100 per cent just so I don’t have regrets. I want to leave everything out there. I take pride every night that I wear a Sens jersey right now, so we’ll see. I’m not too worried about it.”

He is not trying to focus on his contract or the possibility of being traded.

“I’m trying to take day-to-day right now. I’m a Senator. I’m going day-to-day, trying to get better,” he added. “That’s not something I can control and I’m not focusing on right now.”

The Senators are maybe two or three years away from being competitive, and would Pageau want to be around will the rebuild continues?

Would it take around $4.75 to re-sign Pageau, and is that too much for the Senators to pay someone who may end up being their third-line center in a couple of years?

At the trade deadline, the Senators could get an offer of a first-round pick and a prospect for him, and that may be hard to turn down.

Ken Warren of the Ottawa Sun: Re-signing Jean-Gabriel Pageau wouldn’t be cheap for the Ottawa Senators. He’s an ideal third-line center for the Senators, but how much would they be willing to pay him?

If the Senators decide they can’t afford Pageau, he will generate interest from Cup contenders at the trade deadline.

Spezza speculation and Ryan’s spot in the press box

Bruce Garrioch of the Ottawa Sun: There has been speculation that the Toronto Maple Leafs forward Jason Spezza will become available and that he could return to the Ottawa Senators.

It’s unlikely that he’ll be back with the Senators, either as a waiver pickup or through trade.

He could be a good mentor, but the Senators may rather have their young players playing. Colin White and Logan Brown are expected back soon.

Bobby Ryan being a healthy scratch could become a common occurrence.

“You can never say anyone’s in or out every night, but he’s going to have to get some traction. In his defence, he’s worked hard and he’s done all the things he has to but I don’t think he’s back to his game yet. It’s a hard question to answer, I’d like him to be in every night to provide offence for us, but I don’t think we’re there yet.”