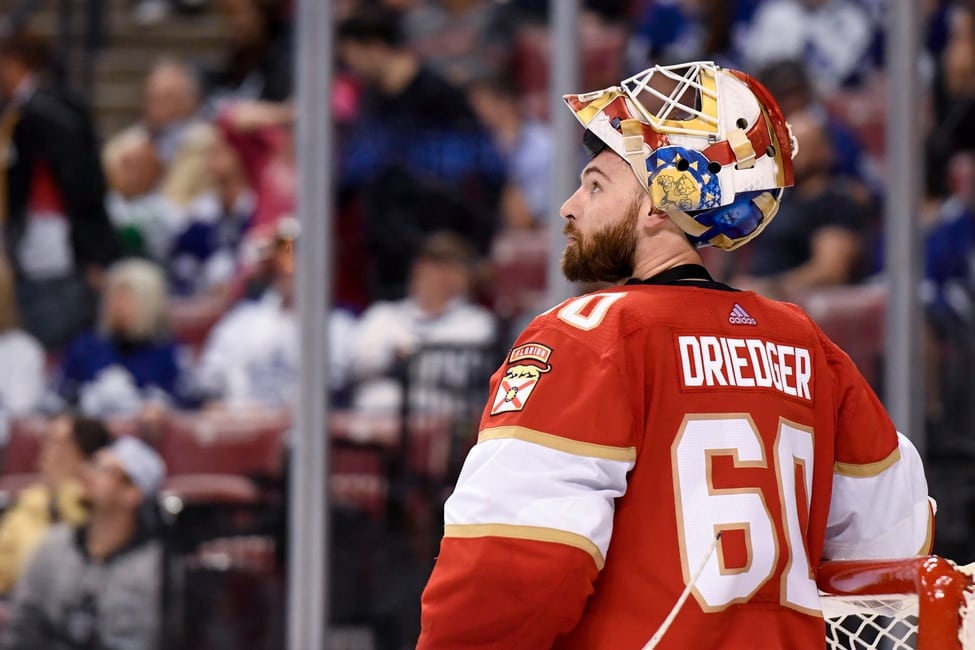 Monday evening’s National Hockey League schedule may not have been the busiest one, but it had plenty of playoff implications as we head into the final month of the regular season. A backup is shining in Florida and keeping his team’s postseason aspirations alive. Plus, one of the game’s best goalies is celebrating a birthday. And finally, we look back at a historic goalie goal.

Driedger Stepping In and Stepping Up

Sergei Bobrovsky was one of the top free agents available on
the market last July and the two-time Vezina Trophy winner cashed in. However,
the first year of his mammoth
seven-year, $70 million contract with the Florida Panthers has not gone as good
as many had hoped.

His 3.23 goals-against average (GAA) and .900 save
percentage (SV%) are well below his career averages. To make matters worse,
Bobrovsky has missed the last three games with a lower-body injury while the
Panthers try to chase down the Toronto Maple Leafs for a playoff spot.

Enter Chris Driedger. The Panthers’ backup goaltender has
been fantastic filling in for their high-priced star. He made 26 saves in Monday
night’s huge 2-1 win at the St. Louis Blues.

Driedger had plenty of help in front of him as the Panthers
blocked 23 shots, including nine during the final five minutes of the game.

“I don’t know if I’ve ever seen shot-blocking as good
as it was tonight,” Driedger said
after the game. “We have the same guys every night laying their bodies
on the line. It was pretty incredible. It was fun to watch.”

Since Bobrovsky went down to injury, Driedger is 2-0-1 with
a 1.31 GAA and .955 SV%. The Panthers are now just one point behind the Maple
Leafs for third place in the Atlantic Division as well as one point out of the
second Eastern Conference wild card.

There is a saying about things, like a fine wine, getting better with age. That old adage can be applied to Boston Bruins goaltender Tuukka Rask, who is celebrating his 33rd birthday today.

Rask is currently having one of the best seasons of his career. He leads the entire NHL with a 2.18 GAA, is third with a .926 SV% and is tied for third with four shutouts. His GAA is the lowest it has been since the 2016-17 season and his SV% hasn’t been higher since 2013-14. His fantastic numbers have the Bruins in the top spot in the league with 98 points.

Although he was Tim Thomas’ backup on the 2011 Stanley Cup team, winning one himself is really the only thing he has yet to do. He led the Bruins to the Stanley Cup Final in 2013 and 2019, but came up short in winning the game’s ultimate prize.

The 2014 Vezina Trophy winner has his name all over the
Bruins record book. He is the franchise’s all-time leader in games played
(535), wins (290) and SV% (.922). He 2.27 career GAA is the second-best in team
history and only Tiny Thompson has more shutouts than his 49. When considering
the long and storied history of the Bruins, Rask’s numbers are made even more impressive.

Rask has made a career of shining in the biggest moments.
His career playoff numbers are even better than his spectacular regular-season
stats. It seems that whenever the Bruins need a huge game out of their goaltender,
Rask is there to provide it. Plus, he is also an amazing quote!

Happy Birthday to one of the game’s best and most colorful
goaltenders!

This Date in Goaltending History: Nabokov Nabs a PPG

While trailing by two goals and shorthanded with less than a
minute to play, the Canucks pulled goaltender Peter Skudra in favor of an extra
attacker. Moments later, Nabokov fired the puck down the length of the ice to
become the seventh goaltender in NHL history to score a goal and the first to
ever do it while his team was on a power play.

Nabokov was the only goalie with a power-play tally for just over 11 years. On March 21, 2013, Martin Brodeur was credited with a power-play goal, the third and final goal of his Hall of Fame career, when he was the last New Jersey Devil to touch the puck before Jordan Staal of the Carolina Hurricanes accidentally put it in his own net.

Catch up on all the latest NHL Goalie News