Even if the Montreal Canadiens have already exceeded expectations this season, Marc Bergevin said Monday he’ll be disappointed if the club finds itself out of the playoffs at the end of the week.

With three games left in the season, the Canadiens general manager is holding out hope the team he’s assembled will be able to climb back into a post-season berth.

“I’ll watch the game on Tuesday, but there’s nothing I can do,” Bergevin said Monday ahead of a critical game against the Tampa Bay Lightning. “I’m proud to see we’re still fighting for a playoff spot.”

The Canadiens (42-29-8) are one point behind the Carolina Hurricanes and two points behind the Columbus Blue Jackets for one of two final wild-card spots in the Eastern Conference.

The Montreal Canadiens beat the Winnipeg Jets 3-1 and remain tied with the Columbus Blue Jackets for the 2nd wild-card spot in the Eastern Conference. 1:46

Given their disastrous campaign in 2017-2018, Bergevin appreciates the progress made by the team this year with a 21 point improvement in the standings thus far.

But the club has been in tough in February and March and lost important games during that span, including regulation losses to the Hurricanes and Blue Jackets last week.

“We’ve had our ups and downs, but if you look at the overall picture, we’ve come a long way from where we were a year ago, and that is what I will base my assessment of our team upon,” Bergevin told reporters at the club’s practice facility south of Montreal.

He noted that while his team has lost games in the final minutes, so have the Blue Jackets and Hurricanes. 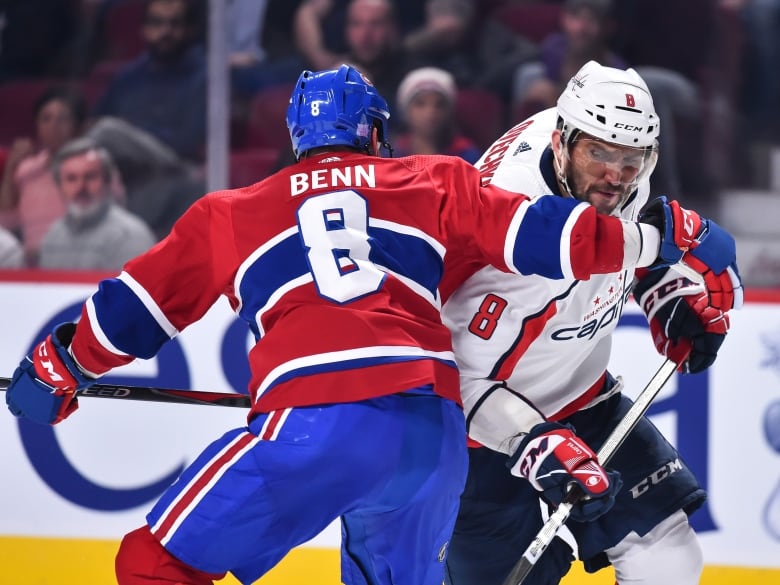 The Montreal Canadiens have a win and OT loss this season against Alex Ovechkin and the defending Stanley Cup champion Washington Capitals. (Minas Panagiotakis/Getty Images)

“Look at how tight the standings are after 80 games over seven months,” Bergevin said. “Two wins makes you jump four or five teams — that’s a bounce here, a penalty there.”

The Canadiens face a difficult road to the playoffs, meeting three of the best teams in the league to end the season.

After taking on the league-leading Tampa Bay Lightning on Tuesday at the Bell Centre, the Canadiens will travel to Washington to take on the Capitals Thursday before rounding out the season against the Toronto Maple Leafs Saturday in Montreal.

The Canadiens have a 1-4-3 record against those clubs this season.

“That’s the NHL. There are no easy games for anybody,” said forward Jordan Weal. “We could play Detroit, Ottawa or Tampa Bay, Washington, you never know what’s gonna happen. That’s the beauty of hockey.”

Forward Paul Byron was back on the ice on Monday with his teammates, less than a week after being left wobbly by an uppercut to the jaw in a fight with MacKenzie Weegar during the Canadiens’ 6-1 win over visiting Florida on Tuesday. His status remains uncertain for the Lightning matchup.

Byron practised on the fourth line alongside Jesperi Kotkaniemi and Nate Thompson. Kotkaniemi, who was a healthy scratch Saturday during the a 3-1 win over the Winnipeg Jets, could return to the lineup.

If both Byron and Kotkaniemi return, Nicolas Deslauriers and Matthew Peca would likely be scratched.

Thomas Milic – 2022 NHL Draft Prospect Profile
Can the Avalanche be stopped? Or even slowed? Top takeaways after a Game 2 blowout
Meet the Steal of the 2022 NHL Draft
How the Lightning built a shutdown line on the fly — and might change it up again
Kadri pots OT winner in return from injury as Avs push Bolts to brink in Stanley Cup final