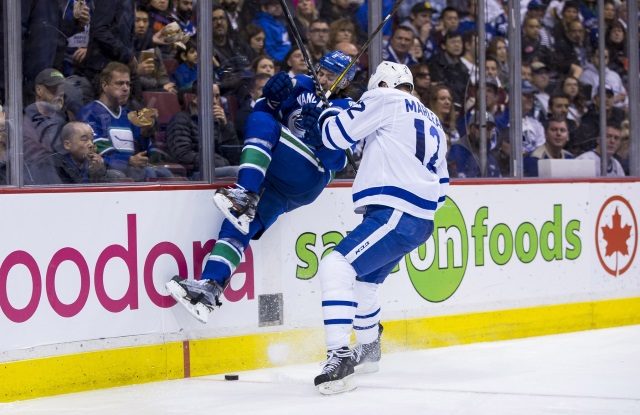 So will it be Thatcher Demko or Jacob Markstrom?

Patrick Johnston of the Vancouver Sun:  Vancouver faced this dilemma less than a decade ago with Cory Schneider and Roberto Luongo. This ended poorly for Vancouver as Schneider was traded in 2013 and then a year later, so was Luongo. Also, Vancouver understands that Jacob Markstrom will decline eventually. He is 29 after all. Demko enjoyed five superb starts in the late stages of the season with two clunkers — one in Vancouver and one in Arizona. Those starts should not take away from the overall body of work.

Will Jim Benning and company keep showing the patience they have had in Demko? It appears that way. This allows Markstrom to keep starting while Demko inches his games started upward. It’s a good dilemma to have.

Damien Cox of The Toronto Star:  Reality dictated the decline of Marleau would be a precipitous one. The day the Patrick Marleau deal was inked was the day one knew there would be an early expiration date. Toronto had numerous young players to sign and at some point, the 39-year old forward could be pushed out. Those are the economics of the NHL these days.

Patrick Marleau signed a total non-movement clause and has a 35+ contract. The cap hit does not go away. So, Kyle Dubas will have to figure out a way to balance the needs of the many over the needs of the few.

Aaron Portzline of The Athletic (Q&A): A few nagging questions seem to be asked this time of year. Unfortunately, aging contracts become a pressing need. One was on Nick Foligno and the other on Brandon Dubinsky. Foligno at $5.5 million while being a little younger, and still capable of scoring some goals is alright. However, at some point, Dubinsky’s contract will have to be addressed. He now has a modified no-move, no-trade list of ten teams Dubinsky must submit. More than likely, a trade would be the toughest road. A buyout becomes increasingly likely.