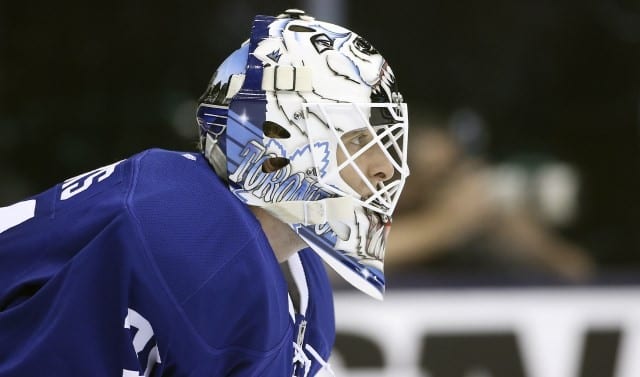 Luke Fox of Sportsnet:  Again, Garret Sparks says the right things to the media and yet the performances remain mostly the same. He allowed two awful angle goals in the 4-1 loss to the Carolina Hurricanes. Unfortunately, this led to more questions than answers for the Toronto backup and what Toronto may do next season.

In his 17 starts, Garret Sparks had a .900 or better save percentage in just eight. That math is not good for Sparks, who is under contract for next year (only $750,000). The wolves are circling. Michael Hutchinson, Joseph Woll, and Ian Scott are all going to get long looks in the Fall.

Iain MacIntyre of Sportsnet:  All in the process of showing some mettle in Vancouver, Tanner Pearson may have found his confidence again. Pearson scored twice in the comeback win over San Jose on Tuesday night. After a long struggle, Pearson has seven goals already in 17 games for Vancouver while seeing increased ice time.

“Being moved twice in one year should be an eye-opener,” he said Tuesday. “I was not playing a lot in L.A., then started off playing a lot in Pittsburgh before getting bumped down the lines. It was a good time to check myself in the mirror. I just wanted to play hockey again.

Also, he played 19+ minutes and looked like the best player on the ice. He looked like the old Tanner Pearson playing with Bo Horvat and Loui Eriksson. The salvation of Pearson’s confidence means bigger aspirations next season.

ESPN.com staff:  All anyone knows is that Victor Hedman suffered an upper-body injury on Saturday trying to check Carl Hagelin. His chin bounced off Hagelin’s helmet and now the Tampa Bay defenseman expects to sit out this week. The hope is that Hedman returns for Game 1 of the playoffs. However, Jon Cooper seemed less optimistic saying Hedman would not be back till next week at the earliest.