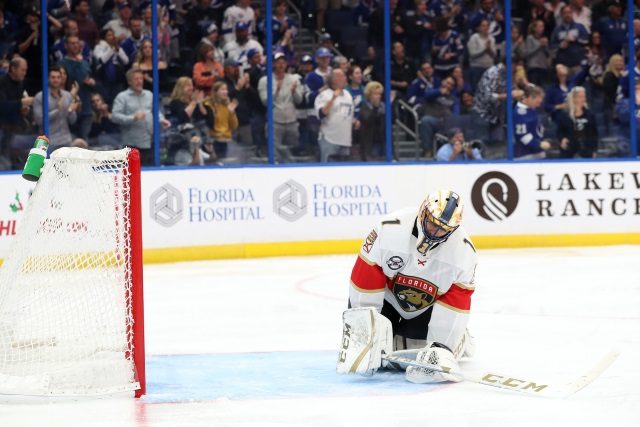 Will Roberto Luongo play on or retire?

George Richards of The Athletic:  The goalie remains “up in the air” about next season. It’s difficult to blame the goaltender considering he is 40 but does have three more years on his contract. Roberto Luongo opines below:

“I want to make sure everyone is on the same page and we all want the same thing. We will see what the plans are for the team moving forward. For me, there are a lot of things involved in the decision, but sitting down with management and seeing their plan is the first step.”

Now, Roberto Luongo has to wait on a new coach as Bob Boughner was fired Sunday morning. Dale Tallon expects to talk to Joel Quenneville before any decision is made. The expectation is that the Florida goaltender comes back for at least one more year.

Ben Kuzma of Province Sports:  The Vancouver Canucks hope to turn the corner and make the playoffs next season. Vancouver’s biggest concern must be the left wing. It is a position with little depth and little of anything. Tanner Pearson provided hope with seven goals in his last games. However, even then, who else is there? It has been a position marked with much inconsistency and tiny amounts of production.

The other position is right side support for Bo Horvat. It was crucially missing in the lineup all season. Unfortunately, free agency may prove tough in solving this problem. After Gustav Nyquist, options are lacking. Players want too much money or like Nyquist want security as well (30-years old).

Finally, a depth defensemen or two that can spell some of the top players like Alex Edler would be ideal. Then, there is any depth scoring help that can be found scouring free agency. Jim Benning‘s work schedule will be busy this summer.

The latest on Jonathan Quick

Josh Cooper of The Athletic:  Does Jonathan Quick get traded this summer? Most signs point to yes but where and how? The biggest obstacle presents itself in the form of his contract — four more years at $5.8 million AAV. Los Angeles eating a good portion of that deal would need to occur.

Teams that could deal for quick include Carolina, Columbus, Edmonton, or even Philadelphia. However, Los Angeles may wait for the market to open up.