Tom Wilson tries not to read everything about him on social media.

You’d think being on the receiving end of endless tweets and messages that are, well, not suitable for work would be reason enough to skip them. But Wilson can’t just ignore it all because sometimes it goes beyond hockey.

“Last year there’s people putting my parents’ address on Twitter and people underneath being like, ‘Oh, good to know,”‘ Wilson said. “I said: ‘Hey, just so you know, this is out there. The mail and stuff, just make sure you’re aware.”‘

Such is life for Wilson, one of the most hated players in the NHL — if not the guy at the top of the list. The Washington Capitals winger has been suspended four times over the past 19 months and there were a few other incidents that might have crossed the line. He is the guy opponents and their fans despise and the player no teammate would willingly do without. Inside the Capitals’ locker room, the 25-year-old Wilson is so admired he could succeed Alex Ovechkin as captain.

In an era where enforcers are hard to find, not only does Wilson play on the edge — he lives on it.

“I think a lot of guys maybe have lost some respect for him,” said St. Louis Blues forward Zach Sanford, who broke into the league with Wilson and the Capitals. “He’s had quite a few cheap hits the past couple years. But that’s just how he plays. He’s on the edge. Sometimes he crosses it.”

Wilson gave Columbus’ Alexander Wennberg a concussion and broke the jaw of Pittsburgh’s Zach Aston-Reese in the playoffs. He gave St. Louis’ Oskar Sundqvist a concussion with a hit to the head — in the preseason — that drew a 20-game suspension that was reduced to 14 by an arbitrator. He has avoided trouble since then and set career highs with 22 goals and 40 points in 63 games, becoming one of Washington’s most important pieces as it tries to repeat as Stanley Cup champion.

The hit occurred in the second period of Washington’s Game 3 win over Pittsburgh. 1:13

“He’s shooting the puck better than he has ever done,” said New Jersey Devils defenceman Connor Carrick, a fellow 2012 Capitals draft pick and junior teammate of Wilson’s in the Ontario Hockey League. “He’s got a good glide for a big guy, and that’s what you’ve seen, I think, with other guys around the league with that frame that haven’t been able to continue.”

When the Capitals selected Wilson 16th overall seven years ago, then-general manager George McPhee hoped they’d be getting a power forward like Milan Lucic. The 6-foot-4, 218-pound Wilson might turn out to be better than Lucic, especially if he can stay on the right side of the suspension line and play 75-plus games in a season.

“He’s fast, he’s got good skill, he plays a physical game, he puts D-men on edge and other forwards on edge when he’s on the ice,” said Vegas forward Ryan Reaves, who gave Wilson a concussion of his own in December and apologized in the aftermath of the hit. “I think he is a really good player. I think if he played a little smarter, he’d be even better.”

Wilson has worked at that. He spent time with vice-president of player safety and former enforcer George Parros going over video clips and what the league deems acceptable. This season he has been thinking more about each hit he delivers because the next one that crosses the line could cost him more than a couple of months.

The Toronto native said his suspension history — two for illegal checks to the head, one for interference and one for boarding — has forced him to change his approach.

“I have to be aware of it,” Wilson said. “Hockey’s an extremely fast game, and it’s a hard-hitting game. It’s probably faster than it ever has been, so those plays happen quickly and I’ve just got to do the best I can to control the situation and control the outcome, and that’s just something that I’ve kind of tried to focus on.” 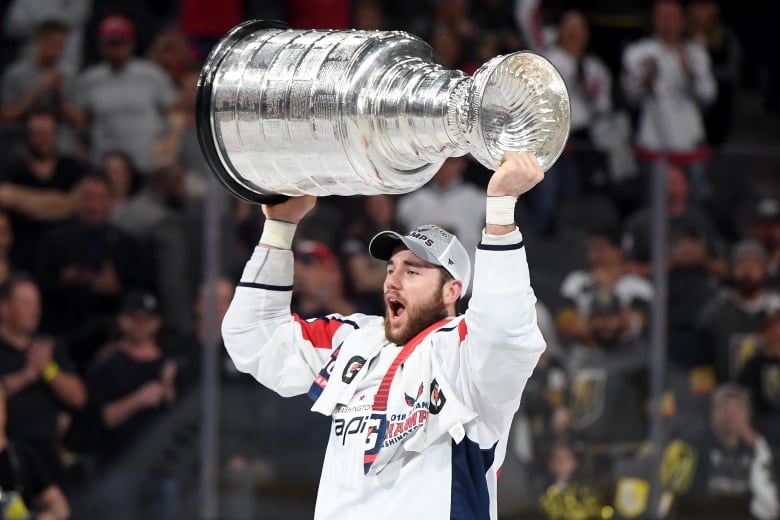 Wilson is one of the very few players to have a disciplinary hearing and not get punished, for an incident with Brayden Schenn in 2013 that was so polarizing the NHL put out a video to explain why it didn’t suspend him.

This season, referees gave Wilson a match penalty and ejected him for a hit on New Jersey’s Brett Seney in November, but the league reviewed it, rescinded it and he played on.

“I don’t know if his timing is wrong or what’s happening, but I wouldn’t say he’s dirty all the time. But obviously he got those incidents where he’s come wrong into situations and that is something he needs to work on,” Sundqvist said. “He’s one of the most important players for Washington and unfortunately he’s been doing some bad stuff and I hope he comes to his senses and stops doing that.”

‘He has to remember what he is’

Pittsburgh’s Jack Johnson said Wilson has a history of being “reckless and dangerous” and that players have to be aware of where Wilson is on the ice because “he’s big and runs around.”

For all the outside talk about taming Wilson, the Capitals don’t really want that.

“He has to remember what he is at times,” alternate captain Brooks Orpik said. “Without that physical side, he’s not going to get the space and the chances that he gets offensively. The reason he gets as many chances and opportunities is because of his physical play and his intimidation. If that leaves his game, then his opportunities are going to be suppressed.”

Teammate Nicklas Backstrom said one of Wilson’s strengths is that he can do it all from 5-on-5 to power play to penalty kill. Washington signed Wilson to a $31 million US, six-year contract last summer for all those elements, which he showcased with 15 points in 21 playoff games during the Stanley Cup run.

Wilson turned Carl Hagelin from an enemy into a friend after five hard-fought playoff series against him. Hagelin watched Penguins’ teammate Aston-Reese go down on a hit to the head from Wilson in the second round last spring, but after a trade to the Capitals, he has come to appreciate the human underneath the No. 43 jersey.

“When you play against certain guys, especially in the playoffs, you obviously don’t like him. You dislike him a lot,” Hagelin said. “And then you come to a new team and you get to know him as a person and all of a sudden he’s a great guy. … It’s one of those things, just like any other person, you have to prove yourself to me as a person.”

Wilson said he wants to be the kind of guy who’s hard to play against but also move on without any hard feelings. Yet he is aware of his reputation.

“The hockey world’s very small,” he said. “I always wanted to be someone that’s hard to play against but you can go out and have a beer with the guy and have fun in the summer or whatever. I think that’s what hockey is kind of about.”

Wilson, of course, is not just the muscle on a star-laden team featuring Ovechkin, Backstrom and Evgeny Kuznetsov but is also a young leader the organization is building around.

“There are those moments that you don’t like to see when that stuff’s going down, but the rest of it and all the Caps fans and all that make up for the good side of things,” Wilson said. “You see kind of those scary things happen in the world, but it’s a pretty darn good life and I love what I do and I wouldn’t trade it for anything.”

Tynan, Frank, Wallstedt named award winners for January
Connor McDavid continuing to raise the bar: ‘We need to talk about it more’
NHL Rumor: The Maple Leafs may have to move out some salary to add a bigger piece
Bruins’ 3 Up, 3 Down: Pastrnak, DeBrusk, Hall, McAvoy & More
Blues Weekly: Losing Streak, Buchnevich, Tarasenko & More