Patrik Laine views the playoffs as a fresh start for himself. He’s not the only Jets player with that approach.

Winnipeg isn’t exactly rolling as it heads into its first-round playoff series against the St. Louis Blues, going 4-5-1 in its final 10 regular-season games. The Blues, on the other hand, nearly ran the table, finishing 8-1-1.

Laine admitted his confidence was low following an inconsistent regular season, but he’s optimistic going into Wednesday’s Game 1 at home.

“Based on my goal scoring it’s obviously not that high, but playoffs are different,” Laine said of his confidence level after Tuesday’s practice.

“It’s all about the winning. It doesn’t matter who scores. At least if somebody’s scoring that’s good for us.”

The Finnish forward was the NHL’s first star for November after scoring 18 goals in 12 games, but he followed that up with three goals in 15 December games.

Laine, who ripped a number of pucks off posts this season, joked when asked if he’d studied the tendencies of red-hot Blues rookie goalie Jordan Binnington. 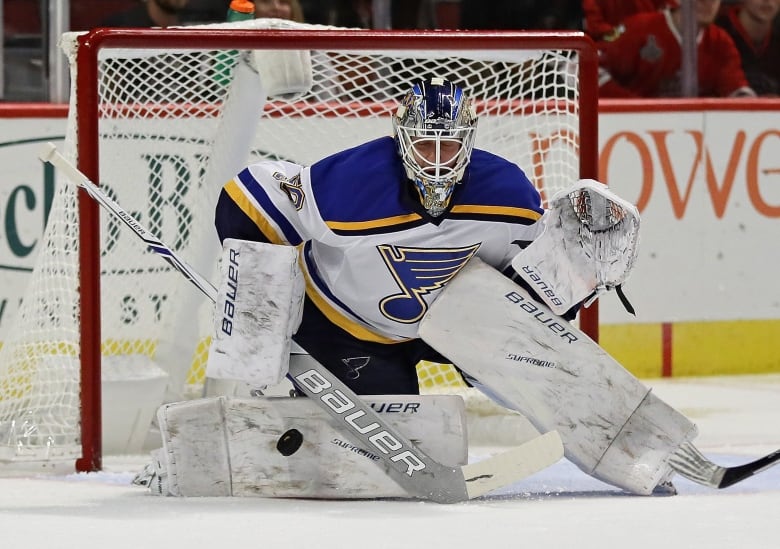 St. Louis rookie Jordan Binnington was 24-5-1 in 30 starts since Jan. 7 with a 1.89 goals-against average and .927 save percentage. (Jonathan Daniel/Getty Images)

“I’ll probably watch some (video of him), but right now with my confidence I’ll just try to hit the net,” Laine said with a smile.

Laine and his teammates said they believe they can flip the switch after losing their grip on first place in the Central Division.

Nashville got top spot with 100 points, while Winnipeg (47-30-5) and St. Louis (45-28-9) tied with 99 points after the Jets beat Arizona 4-2 in their last game. Winnipeg finished second and earned home ice with three more combined regulation/overtime victories than the Blues.

“It would have obviously been nice to go into the playoffs hot and feeling good,” Jets veteran forward Bryan Little said.

“It was definitely nice to win that last game. But I think people don’t realize how different the game is (in the playoffs) and how emotional it gets, and you can feed off that. So, I don’t think the record or the way we finished is going to play a huge role in how we do this year.”

The Jets had their white-clad fans in a frenzy during last year’s post-season push. The team soared into the playoffs on a 9-1 roll and made it to the Western Conference final, losing to Vegas in five games.

The early predictions that Winnipeg would be a strong Stanley Cup contender this season have waned in the past few months, with some critics and fans unsure if they’ll survive the first round. 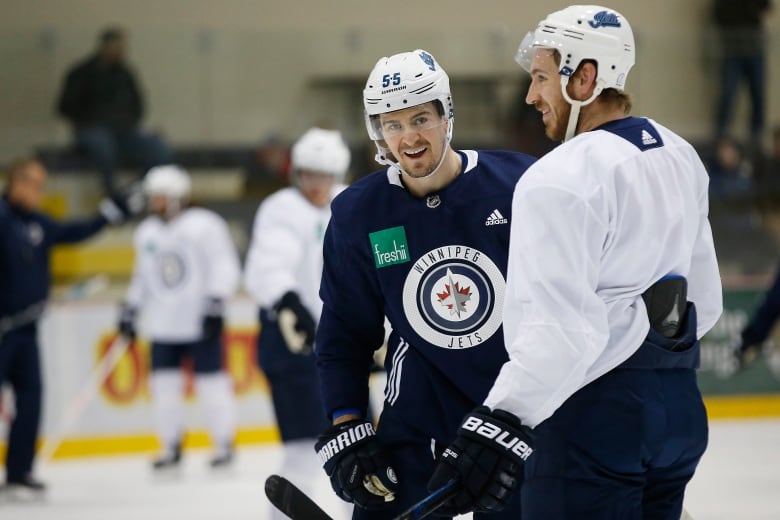 “They’re fans. They can think whatever they want,” Little said. “If they could see us in this room and see our confidence level and how relaxed we are going into (Game 1), I think they would be more confident.

“I’m not sure how we finished last year, I think we won eight or nine of our last 10. So, yeah, it’s a bit different but I think it’s a clean slate.”

The Jets went 3-1 against the Blues in the regular season, but all those games were before the calendar — and the Blues’ fortunes — flipped.

“They’re obviously a different team,” Jets defenceman Dustin Byfuglien said. “We’re not going to sit back. We’re just going to have to go forward and see what they’ve got.”

Byfuglien played the past five games after missing 19 with an ankle injury. Josh Morrissey is ready to hit the ice on the top defensive pairing with Jacob Trouba after sitting out the final 20 games with a shoulder injury.

The Jets’ last line of defence remains netminder Connor Hellebuyck, who was a Vezina finalist last year with 44 wins. He went 34-23-3 in 63 games this season with a .913 save percentage and 2.90 GAA.

After the Blues practised in St. Louis, captain Alex Pietrangelo told reporters he expected the Jets will approach the series as a new season.

“What do you say in playoffs, you find a clean slate and start over?” Pietrangelo said. “They know that. They’re going to come out fresh …

“We have to look at it as a team that was pretty much in first in our division the whole year. We expect a good game from them.”