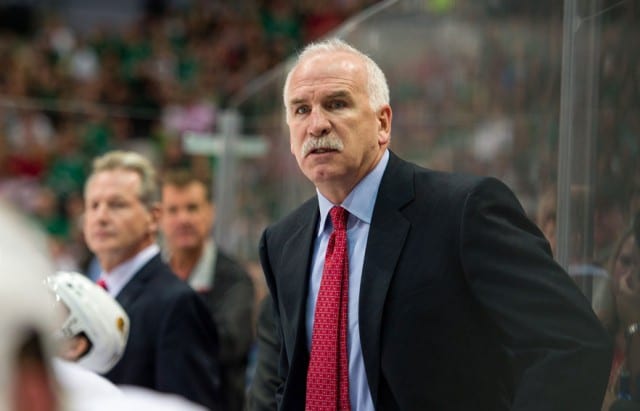 Joel Quenneville all but hired in Florida already?

Darren Dreger:  The Florida Panthers fired Bob Boughner on Sunday and could be naming a new coach as soon as Monday. Reports suggest that Joel Quenneville becomes the next boss. He still has one year and $6 million owed from the Chicago Blackhawks.

The expectation is that the hiring will happen Monday. Also, there is a press conference scheduled for Noon EDT. Now, that could be the standard exit conference but some are suggesting something bigger (Quenneville hiring). Florida had been given permission to talk to Quenneville in advance and the Panthers have moved quickly on this front.

Dennis Bernstein of The Fourth Period:  Apparently, after letting Willie Desjardins go earlier on Sunday, Los Angeles wants to act fast too. They sought permission from Edmonton to talk to Todd McLellan. McLellan coached Edmonton and San Jose previously. Los Angeles wants a presence that can keep the egos in check and avoid what occurred with the interim coach.

While there is nothing imminent, Todd McLellan is clearly Los Angeles’ first choice. However, other teams are in the mix for the former coach. This is even with the Kings negotiating terms. There could be an agreement Monday but there may not be one either.

Buffalo moves on from Phil Housely

Bill Hoppe of Buffalo Hockey Journal:  Buffalo was the darling of the NHL for the first two months of the season and then everything fell apart. After their ten-game winning streak, the Sabres went 16-33-8. That finish was the worst in the league points wise — even worse than Ottawa and Los Angeles.

That implored Jason Botterill to act, albeit reluctantly. Botterill reflected on assessing blame on Housely.

Again, there were continual patterns that emerged throughout the season. These mistakes never were corrected and Housely was dismissed. Buffalo will now hire their sixth coach in just over six years. That is not healthy. Now, the heat is on Botterill to get this right because he may not get another chance.