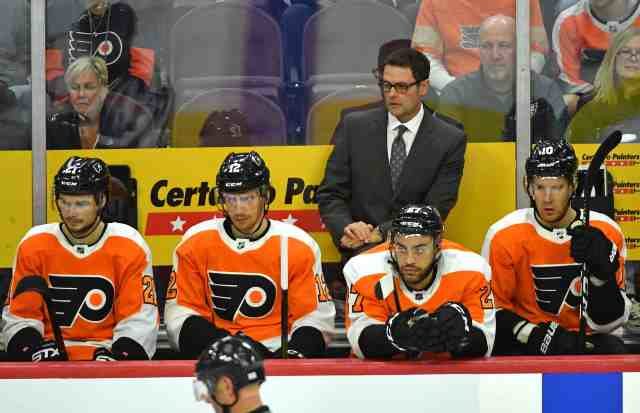 Flyers have several holes they want to fill this offseason

“I had a conversation with Scott this morning, who remains a strong candidate,” Fletcher said. “Talked to him about what I’m going to do. My plan is start my due diligence and reach out to some people and also spend some time with Scott. Hopefully at the right time, name the right person.”

The Flyers will be looking for a second-line center, a top-four defenseman and a backup goalie this offseason.

Fletcher will look to fill holes through free agency or the trade market. Fletcher called the free agent market as “OK, not elite”

Fletcher said he is not a fan of buying players out as it spreads a cap hit out even further.  Defenseman Andrew MacDonald may have been a buyout candidate – one-year left at $5 million.

Coaching Candidates for the Flyers

John Boruk of NBC Sports Philadelphia: The Philadelphia Flyers lost out on John Quenneville as he was hired by the Florida Panthers.

It’s looking like Todd McLellan will soon be hired. The Flyers should start to move quickly before more coaches come off the board.

Potential coaching candidates for the Flyers could include Dave Tippett, Alain Vigneault, and Guy Boucher