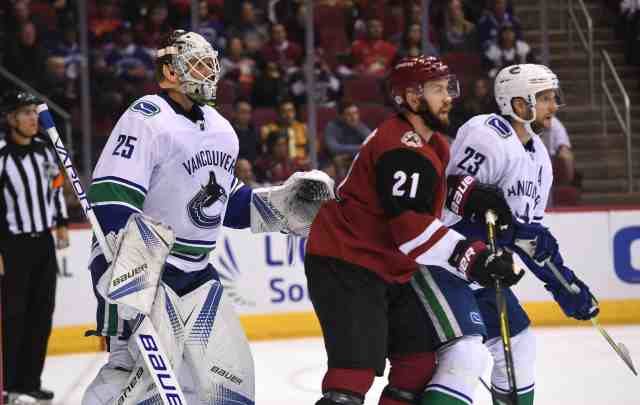 Elliotte Friedman of Sportsnet: Florida Panthers GM Dale Tallon will meet again later this month with Roberto Luongo to talk about his future.

“We’ll have really good discussions about what’s best for and the Panthers.”

Around 70 percent of Joel Quenneville‘s $6 million salary this year will be covered by the Chicago Blackhawks. The remaining term with the Florida Panthers will start at $5.25 million and could get up to $7 million. If a bonus is reached, that number gets added to the next seasons’ salary.

If the Buffalo Sabres offered Todd McLellan a lot of money, it would be surprising if the Los Angeles Kings matched.

If the Kings don’t get McLellan they could look at Tony Granato, Bob Hartley and Patrick Roy – all have ties with GM Rob Blake. Other options could be Doug Weight and Dave Tippett.

There were a number of teams watching Sabres defenseman Rasmus Ristolainen after the trade deadline. The 25-year old right-handed defenseman would get interest.

“Where the first one’s going to be (seventh), its always going to be difficult to move that one…. You’re probably holding on to that one.”

Among the people who could interest in the Edmonton Oilers as a potential GM could include Mike Gillis, Mike Futa, Keith Gretzky, Mark Hunter, Kelly McCrimmon, Bill Zito – maybe Sean Burke, Bill Armstrong. Possibly not Ron Hextall and Ron Francis may not be available.

People who are believed to have said no to the Ottawa Senators – Francis, Trevor Linden, Dean Lombardi, Joe Nieuwendyk and Steve Yzerman.

“No, it hasn’t. He’s played his whole career in Vancouver. We just have to figure out what the deal looks like, but he wants to be here.”

Benning will talk to Jacob Markstrom about a contract extension.

The Montreal Canadiens may have interest in KHL forward Konstantin Okulov. Okulov has a year left on his contract.