With a Western Canada road trip separating the Detroit Red Wings from an extended break, the team sits closer to last place than a wild card spot. In such a position, the Red Wings have no choice but to be active around the rapidly approaching 2019 NHL Trade Deadline.

Ken Holland certainly has a few players to shop around – six Red Wings are scheduled to become unrestricted free agents this summer. The organization also has Filip Zadina and Joe Veleno on the way, plus Evgeny Svechnikov nearing a return to action. Which Holland will we see – overly loyal or his recent free-wheeling, matchmaker self?

This week, a few hockey pundits weighed in on Detroit’s future. Let’s make sense out of all the noise surrounding the Red Wings and their trade deadline plans.

Related – Red Wings Trades: When Will Holland Strike a Deal?

It’s no secret that Jimmy Howard could be on the move – he’s had a terrific season behind Detroit’s “defense” and will be an unrestricted free agent this summer. 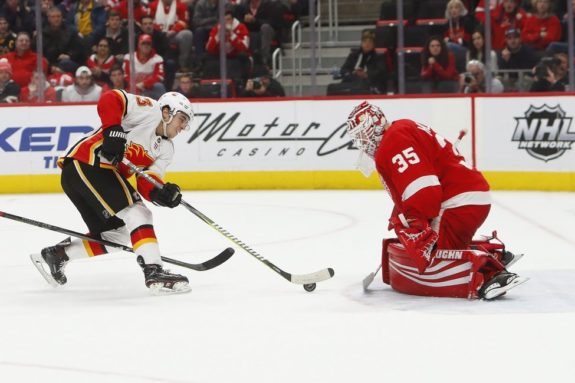 Might Calgary want to swap Mike Smith and Jimmy Howard in a larger trade to solidify their goaltending? (THE CANADIAN PRESS/AP, Paul Sancya)

MLive’s Ansar Khan recently noted that the Red Wings won’t simply give their starting netminder—or Gustav Nyquist—away for nothing:

The Red Wings, according to someone with knowledge of the situation, have set a high asking price for each player – a first-round pick. They don’t expect to get that for either.

If this is indeed the case, the Red Wings will only trade their two valuable players if they’re blown away by an offer. As I shared in a previous article, the going rate for a backup or 1B goalie isn’t great, so the organization likely won’t pursue that kind of deal. Considering the fact that the Red Wings want to re-sign Howard, why disrupt his life for a less-than-optimal return? Khan suggested a two-year deal could be in the works – I proposed something similar last month. More likely than not, Howard is staying put.

What About Gustav Nyquist?

Having a career year on Dylan Larkin’s line, Nyquist ideally is a perfect candidate to move at the deadline. So why is he getting the same treatment as Howard? 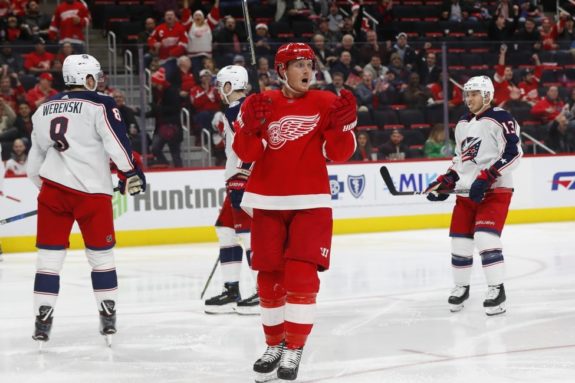 Khan believes that the Red Wings are working on a contract extension for Nyquist as well, and shared an interesting note about his performance:

Nyquist was told last summer that the first three months of the season would be like an audition. He apparently passed it, with 11 goals and 40 points in 48 games.

However, the Red Wings should cautiously proceed with a potential Nyquist extension. They’ll need to draft up new contracts for Anthony Mantha, Andreas Athanasiou, Tyler Bertuzzi and Evgeny Svechnikov the following summer. And with a potential lockout on the horizon, the organization will need to be prepared for anything, including a salary cap upper-limit reduction. Where will all the money—and ice time—come from to support these players?

The Hockey News’ Matt Larkin has another perspective on Nyquist:

Good chance he’d waive his NTC to play on a contender. Enjoying his best season in years, so GM Ken Holland will field plenty of offers. Would augment a depth-starved team not wanting to overspend on a top-tier rental.

From this angle, a first-round pick is likely off the table, but there could still be quality offers out there. Teams strapped for cap space or competing for a wild card spot would be perfect trading partners for Nyquist. Might the Red Wings jump on a deal for a second-round pick and a prospect?

With Dennis Cholowski and Filip Hronek establishing themselves as regulars and the likes of Joe Hicketts, Libor Sula  and Vili Saarijarvi learning the ropes with the Grand Rapids Griffins, shouldn’t the Red Wings clear room on the back end? Not so fast, per Khan’s report.

Will the Red Wings trade Nick Jensen or opt to re-sign him? (Amy Irvin / The Hockey Writers)

Nick Jensen is expected to draw interest, but the team apparently wants to re-sign him so a trade may not happen. Sportsnet’s Elliotte Friedman noted Jensen as a potential sneaky good add in his most-recent 31 Thoughts column:

“14. Another rental who doesn’t get much attention, but has quietly played pretty well: Detroit’s Nick Jensen. On a team that doesn’t have great possession numbers, his are pretty good. The Red Wings will need to make a decision on him over the next few weeks.”

There simply isn’t room to retain Jensen beyond this season – Hicketts will need waivers next season to be sent down, Cholowski and Hronek need to play, plus Jonathan Ericsson, Trevor Daley, Danny DeKeyser and Mike Green are scheduled to return for the 2019-20 campaign.

Daley could draw interest if he can return from injury and play well given his playoff history and palatable cap hit. His no-trade clause opens up just before the deadline from a full no-trade to having to provide a 15-team no-trade list.

Frugality isn’t the worst thing when it comes to roster management. As a rebuilding team, the Red Wings should limit contract extensions to those who are absolutely necessary to the next phase. Howard is, but the other trade candidates are not.

Remember when the Red Wings pushed to re-sign Brendan Smith a couple seasons back, but opted to trade him instead? The same could be the case for Howard and Nyquist this season. Holland should work the phones and kick every single tire until the best offer for his rentals materializes. More picks and prospects are needed to return to contention.