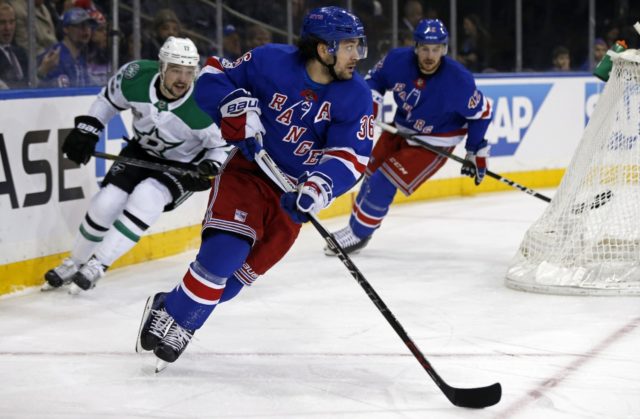 The 31-year old Zuccarello was undrafted and signed by the Rangers.

We’ve confirmed that the #Stars have also placed Martin Hanzal on LTIR, which gave them an additional $4.75M to work with.”

Larry Brooks: “You can argue that Rangers should have extended Zuccarello rather than trade him for this return. Of course it would have taken both sides to agree to new deal. But it is foolish to suggest they were fleeced/hosed. Do you think they had better offers and rejected them?”

Ken Wiebe: “Really like this addition for #Stars who add a versatile winger who can play up and down the lineup, has experience, plays incredibly hard and can produce offensively as well”

James O’Brien: “The Dallas Stars do at least one thing EXTREMELY right under Jim Nill: big trades. I *love* this for Dallas.”

🚨TRADE ALERT🚨
Mats Zuccarello has been traded to the #GoStars. Zuccarello can play all situations and is a buzzsaw in the offensive zone, capable of retrieving pucks at a high rate and setting up teammates for offense. pic.twitter.com/eY27KX9Qun

Zucc’s been really good this yr, especially lately, and mid-round picks are only long shots anyway. I don’t know /why/ DAL thinks they’re a contender but they paid a good price for a good rental.https://t.co/Uv559Sw0Mp pic.twitter.com/jHvug3wUcc