In today’s Rumor Rundown we look at a couple players who are starting to make more noise as the NHL Trade Deadline approaches. Will Erik Karlsson really be traded before Monday? Or, are the Senators thinking more long-term? Also, why was Tomas Plekanec kept out of the lineup on Saturday for the Montreal Canadiens? Is a trade in place?

There is also news regarding the Edmonton Oilers, Tampa Bay Lightning, and others.

At first, Karlsson wasn’t going anywhere but as the days move on and the trade deadline nears, there are more and more people who believe a trade could happen. If it does, count the San Jose Sharks as a team who is keenly interested.

TSN Hockey Insider Pierre LeBrun reported the Sharks have spoken to the Senators about their star defenceman and he added that the Sharks have the room to take on Bobby Ryan if that’s a deal-breaker for the Senators. LeBrun said, “And I guess it’s worth pointing out that if Bobby Ryan is to be part of any Karlsson deal…. the Sharks have tons of cap room. But again, not sure it will go anywhere with San Jose… I have a hard time seeing a fit but who knows.”

The Senators could be without Erik Karlsson until November. (Amy Irvin / The Hockey Writers)

Ryan carries a big salary and his production has dipped in the last couple seasons. The Senators would like to offload his contract and one of the best ways to do so is forcing a team who wants Karlsson to take on Ryan. There are a few teams who could make this work, the Edmonton Oilers, Vegas Golden Knights and New Jersey Devils are others. One team interested but can’t make the cap work are the Tampa Bay Lightning. A third team would have to get involved and as we saw from the Brassard trade, that is possible.

Karlsson has five goals and 37 assists in 55 games for the Senators and has made it clear he does not want to be a part of a rebuild, wants to go to a cap team and expects to get full value for his services.

It’s not 100% Plekanec gets moved and as a pending UFA that is rumored to be traded, the odds have to be closer to a done deal than something that isn’t happening. Teams started phoning Montreal when Derick Brassard was traded and in anticipation of the fact that there is keen interest in another team acquiring him, the Habs are holding him out of the lineup for Saturday’s game against the Tampa Bay Lighting.

Bob McKenzie is reporting that just because Plekanec is out of the game, it doesn’t mean a trade is in place. It simply means one is expected to fall into place right away.

Plekanec has six goals and 18 assists in 60 games for the Canadiens this season and has spent his entire career with the Habs.

Joe Smith of the Tampa Bay Times is reporting that Lightning GM Steve Yzerman is not willing to move roster players for the sake of making a deal and that means they’d be out on Erik Karlsson. Smith believe it could lead the Lightning more toward a player like New York Rangers’ blueliner Ryan McDonagh. This is if Tampa wants a player more long term. Smith still believes the best rental bets for Tampa are Detroit’s Mike Green and Columbus’ Jack Johnson. 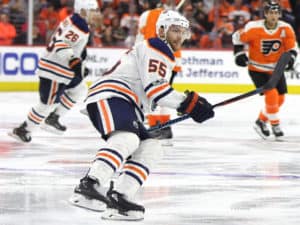 Terry Jones of the Edmonton Journal reports Oilers GM Peter Chiarelli indicated he had no interest in blowing up his roster and considers this season an anomaly but he is going to remodel it because something is off. Chiarelli cited the need for more speed and that if he was to make a trade he’d be looking for “almost-ready-for-prime-time prospects.”

Chiarelli did acknowledge receiving interest in pending UFAs Maroon and Mark Letestu but also that he’s spoken to both about re-signing. He knows there is value out there for them as proven playoff ready players. One thing that appears not to be on the table is the 2018 first-round pick of the Oilers which now looks to be very high.

The Oilers have already traded Brandon Davidson as part of that remodeling.