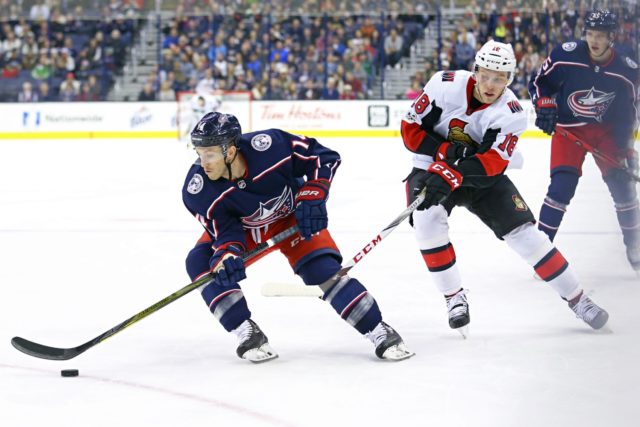 The Ottawa Senators have traded forward Ryan Dzingel and a 2019 7th draft pick (Calgary’s) to the Columbus Blue Jackets for a 2020 2nd round pick, a 2021 2nd round pick and Anthony Duclair.

The 26-year old Dzingel was drafted 204th overall in the 7th round in the 2011 draft by the Ottawa Senators. He carries a $1.8 million salary cap hit.

David Pagnotta: Blue Jackets GM Jarmo Kekalainen: “We are very happy to add Dzingel to our team as he is a very good player & goal scorer in the NHL & quality person who we believe will be a great fit with our group. He has local ties & in talking to him is very excited about coming back to Columbus…”

Sens Communication: “The acquisition of the two second-round draft picks provides Ottawa with up to 16 potential selections (including conditional picks) in the first three rounds of the next three NHL Drafts.”

Bruce Garrioch of the Ottawa Sun: Reports that he turned down a five-year deal at over $20 million from the Senators because he was looking for more.

“People like Dzingel because of his speed, but he doesn’t exactly pay the price by going into the corners and had of success this season playing on the wing with Duchene. Dzingel will be a good compliment for the …. as they make a run in the playoffs.”

Marisa Ingemi: “The Ryan Dzingel cost is actually a little lower than I expected.’

J.D. Burke: “Honestly, I kind of like Columbus going all in on this team. If not now, when?”

Ryan Pike: “Dzingel to CBJ is low-key smart and seems like the exact type of team-building Jarmo should be doing right now.”

Ryan Pike: “It is still entirely possible that Dallas and Columbus could trade for everybody and still both miss the playoffs.”

Dzingel’s been handy, Duclair’s a negative on the year. In expected value, a 2nd isn’t worth that much more than a 7th. The key for OTT is that they got two picks.

Dzingel was a hot name but I wonder how much of his allure was driven by the fact that he’s shot 16.9% and 16.5% the past two years compared to 11.4% and 13% in the two years prior. His on-ice impact over the past two years has been poor pic.twitter.com/pnt66ju0R1